The Dutch coastline has permanently changed

As from July 11th 2012, the Dutch coastline has permanently changed. Queen Beatrix gave the sign for the closure of the seawall of Maasvlakte 2. At slack water, when there was minimal current, the large equipment of contractors Boskalis
and Van Oord closed the gap in the eleven-kilometre long seawall. 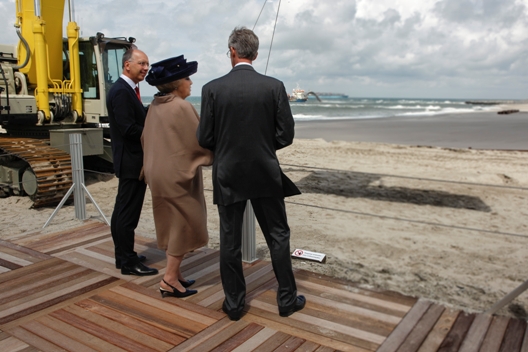 Hans Smits, President and CEO of the Port of Rotterdam Authority: "After 3.5 years of hard work, today we reached a major milestone. The seawall around Maasvlakte 2 has been closed and these 2,000 hectares of new Netherlands are properly protected against the sea."

At the end of 2008, the Port of Rotterdam Authority commenced construction of Maasvlakte 2, the land reclamation project in the North Sea for the development of the port of Rotterdam. The construction of the new port area is on schedule, and the first container terminals will be operational in 2014. This project changes the map of the Netherlands. The port of Rotterdam grows by 20%, the Netherlands becomes 2,000 hectares larger, and the coastline is 3.5 km further in the sea.

Seawall
That new coastline is now approaching its completion. Its construction took place from two sides over the past years. On the northern side, alongside the navigation channel to the port, 3.5 km of hard seawall was built. The construction is unique in the Netherlands due to the stony dune in combination with a block dam for which almost 20,000 concrete blocks from the seawall of the existing Maasvlakte were reused. On the south side, a soft seawall of 7.5 km was built, made up of beach with dunes of 14 metres high. The dune has been planted along its entire length with marram grass. The beach on the south side has been widened by 100 metres so that beachgoers can enjoy a lovely wide beach at high tide as well. Today the gap between these two sections was closed.

Closure
Since the middle of June, the trailing suction hopper dredgers Prins der Nederlanden and Vox Máxima and the cutter suction dredger Edax have been bringing the last 10 million cubic metres of sand to the missing section of seawall between the sand and the stony dune. Today the three dredgers are joining forces to connect the northern and southern sections of the outer contour. This first large sand closure since the construction of the Philipsdam 25 years ago is an impressive exploit of the hydraulic engineering contractors Boskalis and Van Oord, united in PUMA (Projectorganisatie Uitbreiding Maasvlakte). 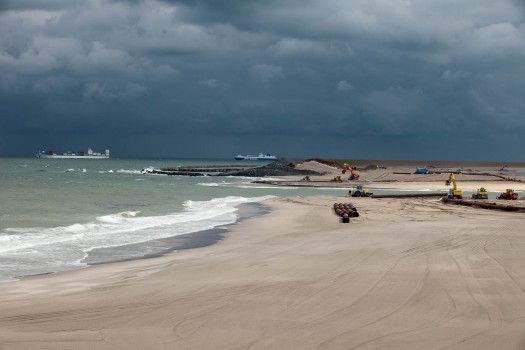 Pride of Holland
The construction of Maasvlakte 2 is a part of the Pride of Holland. The two large Dutch hydraulic engineering companies Boskalis and Van Oord constructed this new land in a very short time. The new area is expected to enable the activities in the port of Rotterdam to continue to grow, certainly in the coming 20 to 25 years. That is good for international trade, good for the position of Rotterdam as the gateway to Europe and good for employment.