The Netherlands and the Philippines join forces on development Manila Bay, Philippines

The Philippines and the Netherlands will jointly develop a master plan to clean up Manila Bay and improve the living conditions in Metro Manila and its coastal zone.

The bay area will also be made more resilient to the effects of climate change.

Research institute Deltares takes the lead in the development of this plan.

The Dutch ambassador to the Philippines, Marion Derckx, and secretary Ernesto Pernia for socio-economic planning in the Philippines, signed a Memorandum of Understanding in Ortigas, Pasig City, on 22 January. 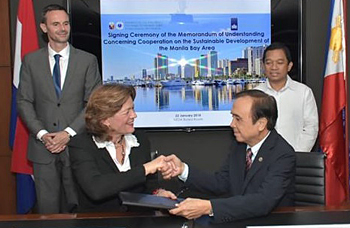 The experience gained by the Netherlands in similar master plan projects in Bangladesh, Vietnam, Myanmar and Indonesia will contribute to the planning study in the Philippines. 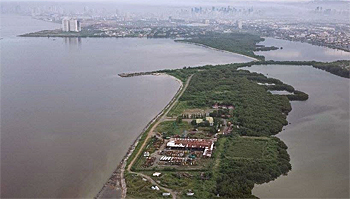 Framework for redevelopment
Regional manager Tjitte Nauta of Deltares and project director for MBSDMP master plan: ‘This plan contains the frameworks for management and development of the bay: what is possible, what isn’t and what has to be done where? The plan targets economic, ecological and social goals for more than 25 million local inhabitants’.

The preliminary activities for the master planning exercise began in 2015 when the Philippine government requested the government of the Netherlands to dispatch a group of Dutch Disaster Risk Reduction experts to Manila.

Initial risk assessment
The Dutch experts conducted a scoping mission, identifying and assessing the situation in the Manila Bay area, and recommended measures for its sustainable development.

After the mission, the Dutch experts confirmed the urgent need for a framework for the development and management of the Bay area.

These findings prompted the Philippine government to allocate 250 million Philippine piso of the National Economic and Development Authority (NEDA) for the formulation of the master plan. 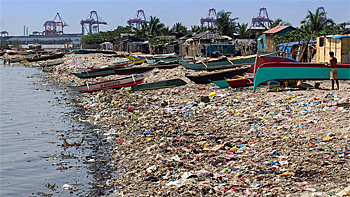 Working with nature, not against
‘We are fortunate to have the Dutch with us in this endeavor. Their extensive knowledge and experience in implementing programs and projects that protect vulnerable coastal zones are unparalleled,’ Philippine secretary Pernia said in his keynote speech.

‘They have developed integrated and innovative solutions to coastal management that mimic natural processes, instead of working against natural processes’, he said, referring to the infrastructure solutions in the Netherlands that not only protected its coastal areas but also boosted the economy and food supply.

‘This is a testament that economic development and ecological objectives could go hand in hand’, Pernia said.

This news item was originally published on the website of Deltares and NEDA.