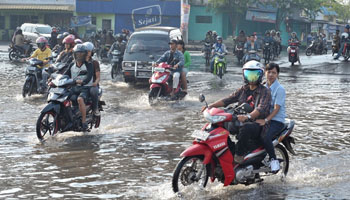 The Dutch government will continue to provide a grant program for Indonesia when the current grant package ends this year, a visiting Dutch minister said on July 4.

According to Knapen, in the coming years, the Netherlands intends to intensify its cooperation with Indonesia in the areas where the Indonesian people really need it and at the same time the Netherlands can provide them.

“For us, it’s very important that we invest in a way that creates pockets of economic growth,” he said.

“We have a long history of trying to keep our feet dry as half of our country is below sea level. We feel familiar with this issue and maybe we can bring something to the table,” he added.

Flood prevention Jakarta Bay
Bappenas head and National Development Planning Minister Armida Alisjahbana, also speaking at the press conference, said that Knapen was referring to a plan by the Indonesian government and the Jakarta administration to develop a dike system, similar to that in the Netherlands, in the Jakarta Bay to prevent seawater from the Java Sea from flooding North Jakarta.

Dike system like in the Netherlands
“One goal of the cooperation would be for a dike system on Jakarta’s coastline,” Armida said, adding that she believed the Netherlands would be a perfect partner in developing a dike system in Jakarta as the country already had its own dike system, which had been proven to be very effective at preventing flooding.