"The Netherlands is fully committed to making the next leap forward", said Dutch prime minister Mark Rutte ending his speech at the United Nation's Sustainable Development Summit in New York on 26 September 2015.

At the start of the UN summit all 193 members of the United Nations adopted the 17 sustainable development goals (SDG) for 2030. All leaders and diplomats stood and applauded loudly (see top photo)

The SDGs include a stand-alone goal for water that not only aims at universal access to safe drinking water and adequate sanitation by 2030, but also halving the proportion of untreated wastewater and a significant increase of efficient water use. 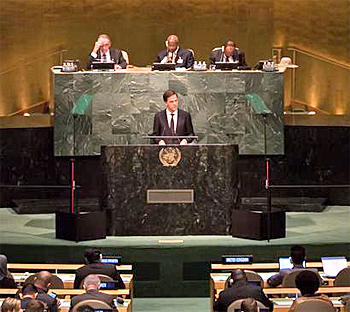 Dutch prime minister Rutte invited the private sector to engage as he believes governments cannot achieve the goals on their own.

Rutte mentioned Dutch multinational companies DSM, Unilever and Heineken as examples for their commitment to the agenda of sustainable development.

As a specific example he referred to Heineken's brewery in Burundi that buys sorghum - an ingredient to brew beer - from 18.000 local smallholder farmers. In association with non-governmental organization EUCORD and financed by the Dutch government, the farmers were not only learned to increase their productivity and the quality of their crops, but they were also taught on skills to improve their bargaining position. 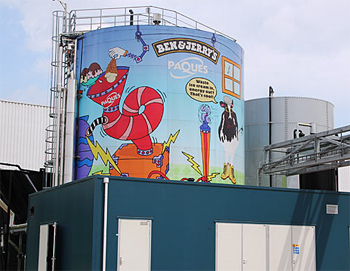 Ben & Jerry's ice cream factory in Hellendoorn, the Netherlands, is equipped with the latest anaerobic wastewater treatment technology to produce enough biogas to meet 40 percent of the factory's energy demand.

Hardwired sustainability
On the occasion of the UN summit Dutch CEO Paul Polman of Unilever said in an interview with Business Green that he sees it as a responsibility of business to promote sustainability.

According to Polman Unilever has hardwired sustainability into the heart of everything it does across the business, in its operations, its innovations, its brands and its whole philosophy. "There is not just a moral imperative to be sustainable but a clear business case too", he said in the interview.

On the issue of the water goal Polman specially mentioned the social mission of Unilever's brands such as Dove, Lifebuoy, Domestos, Ben & Jerry's and its water purification brand, Pureit.

"These brands are growing strongly and creating movements for change. The global goals have a strong correlation with the social mission of many of our brands", the CEO of Unilever said.

Polman has been strongly involved in the sustainability agenda and just prior the summit Polman received the UN’s Champion of the Earth award, for leading the business world towards a new model of sustainable growth.

Inclusive and equitable economic growth
The global water community has always claimed a stand-alone goal for water. Critics warned that this would stimulate to continue working in silos.

Many heads of state therefore focused in their speeches on the achievement of inclusive and equitable economic growth that benefits everyone, creates more jobs and allows sustainable use of resources such as water.

Dutch Ministry of general affairs
The Hague, the Netherlands
+31 77 465 67 67
www.government.nl/ministry-of-general-affairs