The Netherlands to host new global centre on climate adaptation

The Netherlands, Japan and UN Environment Programme (UNEP) will lead the establishment of a Global Centre of Excellence on Climate Adaptation in the Netherlands.

Together with the global partners, Dutch state secretary Sharon Dijksma of Infrastructure and the Environment signed a Statement of Intent on 6 February.

The centre will support countries, institutions and businesses to deal with climate change adaptation issues, such as natural disasters and economic disruptions. 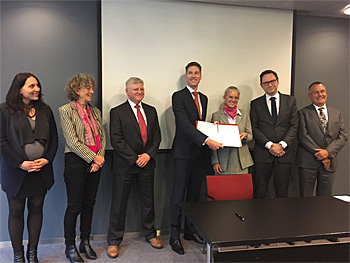 Signing ceremony on the establishment of a centre on climate adaptation, in the Netherlands.

Multitude of risks
On occasion of the signing, state secretary Sharon Dijksma said: “Failure of dealing adequately with climate change will increase a multitude of risks such as natural disasters, social and economic disruptions and increasing political tensions.”

“Many people are looking for good practices and guidance with regard to climate change adaptation”, Dijksma continued. “I am convinced the Global Centre of Excellence on Climate Adaptation can help addressing these challenges.”

The Dutch government will decide on the location of the centre at short notice. 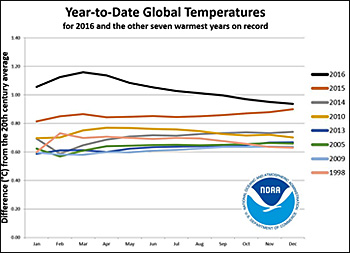 A warming planet leads to more frequent extreme weather events such as droughts and floods.

Hotter planet
“Even with the Paris Agreement on climate change, our planet is heading for a global warming of around 3 degree Celsuis,” said Ibrahim Thiaw, deputy chief of UN Environment.

“Our survival depends on learning to live on a hotter planet with more extreme weather, erratic rainfall and rising sea levels. This Centre is a welcome step, but other countries need to follow this example and urgently invest in climate adaptation.”

Paris agreement
The historic Paris Climate agreement has made climate change adaptation a top global priority. The Global Centre of Excellence on Climate Adaptation, an initiative of The Netherlands, Japan and UN Environment will contribute to building a climate resilient world.

The centre will support those that struggle to put climate adaptation effectively into practice, in all parts of the world. It will collect lessons from recently executed policies, programmes and projects and use those to develop guidance to accelerate climate adaptation.

Support countries and communities
The resulting pool of global knowledge and know-how to understand what works and what doesn’t will be used to support countries, communities and companies to successfully integrate climate adaptation into their investment decisions. In that way, every new road, every construction, every crop field becomes an opportunity to become more resilient. 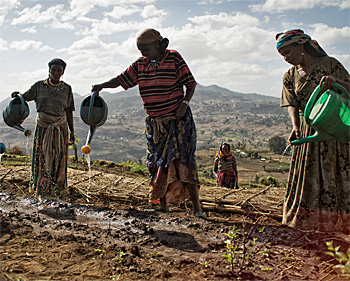 This news item was originally published on the website of Dutch government and UNEP.

More information
Ministry of Infrastructure and the environment
The Hague, the Netherlands
+31 70 456 00 00
www.government.nl/ministry-of-infrastructure-and-the-environment