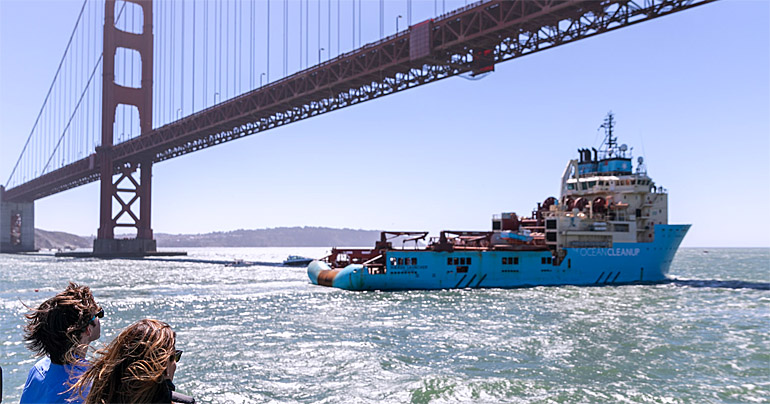 The first ocean cleanup 'System 001' set sail from San Francisco on 8 September escorted by a Coast Guard vessel, a shipload of camera crews from around the world and a flotilla of curious Saturday boaters.

A tug ship took the 600 m long floating U-shaped barrier with its 3 metre skirt attached below, and fitted with solar power lights, cameras, sensors and satellite antennas, out of the harbour into the Pacific Ocean.

A dream come true for 24-year old Dutch inventor Boyan Slat (below left on top photo) who started his plan six years ago for a system to tackle the massive patches of plastic debris floating in the world’s oceans. 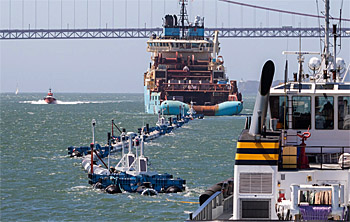 Ocean's Cleanup high-tech barrier, passing under the Golden Gaste bridge, on its way to the Pacific Ocean for its first deployment.

World’s largest plastic soup
The system will be deployed in the Great Pacific Garbage Patch, the world’s largest accumulation zone of ocean plastics. Situated halfway between Hawaii and California, the patch contains 1.8 trillion pieces of plastic, and covers an area twice the size of Texas.

The barrier is designed to be propelled by wind and waves, allowing it to passively catch and concentrate plastic debris in front of it.

Due to its shape, the debris will be funnelled to the center of the system. Moving slightly faster than the plastic, the system will act like a giant Pac-Man, skimming the surface of the ocean. 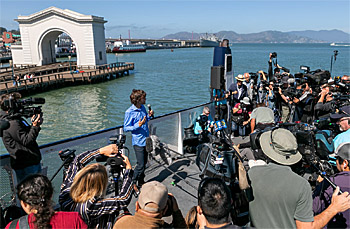 Recovery and recycling of plastic
The Ocean Cleanup team anticipates that the first plastic will be collected and returned to land within 6 months after deployment. This will mark the first time that free floating plastic will have been successfully collected at sea.

After returning the plastic to land, The Ocean Cleanup plans to recycle the material into products and use the proceeds to help fund the cleanup operations.

More deployments planned
While the main objective of System 001 is to prove the technology and start the cleanup, a secondary goal is to collect performance data to improve the design for future deployments.

Hence, the system is equipped with solar-powered and satellite-connected sensors, cameras and navigation lights to communicate the position of System 001 to passing marine traffic, and enable extensive monitoring of the system and the environment. 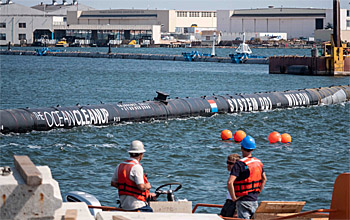 Tremendous support
Boyan Slat, Founder and CEO of The Ocean Cleanup, stated: ‘I am incredibly grateful for the tremendous amount of support we have received over the past few years from people around the world, that has allowed us to develop, test, and launch a system with the potential to begin to mitigate this ecological disaster.’

Slat added: ‘This makes me confident that, if we manage to make the technology work, the cleanup will happen.’

Once successful, and if the funding is available, The Ocean Cleanup aims to scale up to a fleet of approximately 60 systems focused on the Great Pacific Garbage Patch over the next two years.

This news item was originally published on the website of The Ocean Clean Up.