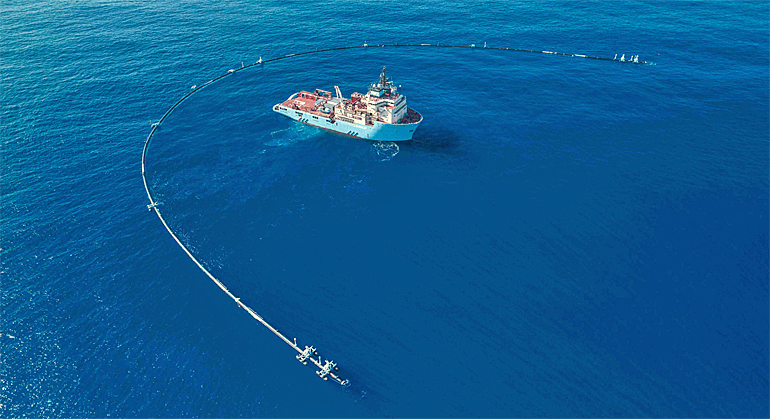 Some 350 nautical miles off the coast of San Francisco, the team of The Ocean Cleanup started its two weeks trial with its System 001 to collect plastic waste from the ocean.

The trials are a crucial step before System 001 will be moved approximately 800 nautical miles further to the Great Pacific Garbage Patch.

The team of The Ocean Cleanup identified five main goals for the coming two weeks. If the goals are met, it will confirm that the system is up for the challenge. 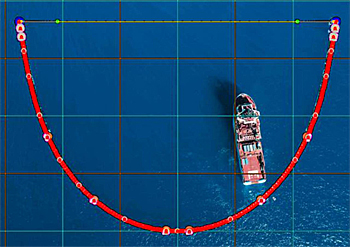 An overlay of the modelled shape onto a top-view image of the system after installation, September 15.

U-shape installation
During the trials the system was put in its intended U-shape for the first time. To do this, the four closing lines inside the system needed to be connected.

It took approximately two days to arrange the system in its operational configuration. With the aid of the Maersk Launcher and the Megamaid, the closing lines were connected from the inside.

Speed test and reorientation
Part of the trials will be the system’s speed to ensure that it does move faster than the plastic. This detail is essential for capturing plastic within the system.

Additionally, the system’s ability to reorient when wind/wave direction changes will be tested. For this, it will be towed in various directions against the wind (45, 90 and 180 degrees). When facing different directions, the system should reposition itself facing the plastic again.

The width of the system will fluctuate based on the conditions of the ocean, but it must stay in a desirable range in order for it to capture and retain plastic.

According to the team, the installation went very smoothly, and the system is behaving well so far.