On Sunday, July 13th at 15:00 hrs, the Big Jump took place throughout Europe. Tens of thousands of people jumped into the water at exactly 15.00 hrs, drawing attention to the importance of clean water for people and nature.

In the Netherlands Big Jumps took place in seven provinces.

The national Dutch Big Jump 2014 was at the recreation area Grazenbol in Wijk bij Duurstede. At 15.00 hours sharp over a hundred children jumped in the water together.

Prior to the jump, the children did a warming up exercise led by top swimmer Joerie Verlinden. 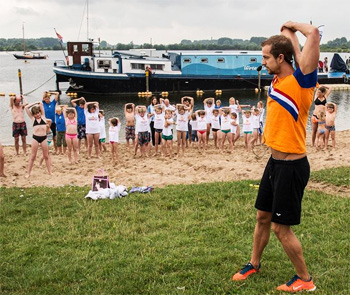 Clean water awareness
Other activities included a guided tour on board the educational ship MS Watervlo that is specially equipped to learn kids about the importance of water.

At many other locations in the Netherlands Big Jumps were organized by regional divisions of the nature conservation organisation Natuur en Milieufederatie, often in collaboration with local municipalities and water boards..

About Big Jump
Big Jump is an annual event in Europe to raise awareness for the importance of clean surface water such as ponds, lakes and rivers. The event wants to restore the powerful links that used to bind people to these spaces and wants to gain people's support to the big European restoration effort for rivers and wetlands.

The organisers - campaigned by European Rivers Network (ERN) - invite citizens to join a simultaneous jump in the river or lake.