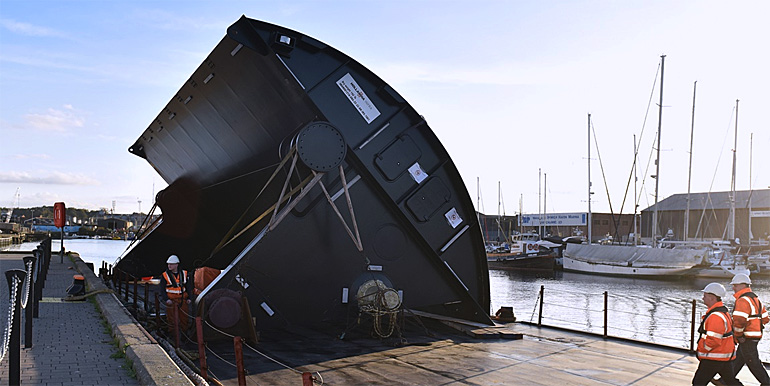 A 200 tonne tidal gate has arrived in Suffolk, UK, ready to be installed at Ipswich’s new flood barrier.

The delivery of the gate from its manufacturing site in Rotterdam, Holland, is a significant step towards the completion of the Environment Agency’s 70 million UK pound project. This reports the Environment Agency who is responsible for the new flood barrier to protect the port of Ipswich.

The work was carried out by Hollandia, a sub-contractor for Environment Agency contractor VBA – a joint venture between VolkerStevin, Boskalis Westminster and Atkins. 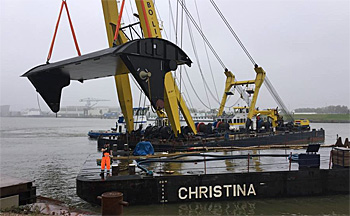 The 200 tonne flood gate put on transport in Rotterdam, the Netherlands.

Heavy transport
It took 2 years to design and build the gate and 24 hours for it to be transported across the North Sea, finally passing under the Orwell Bridge and entering Ipswich early on the morning of Friday 27 October.

The gate is 22 metres wide and will stand 9 metres tall when it is in ‘closed position’. It is finished with 5 tonnes of special paint that will help protect it, as it spends most of its life under water.

Final elements
Project manager Andrew Usborne at Environment Agency, said: ‘This is a key milestone for the project and sees the final elements of the barrier arriving on site.’ 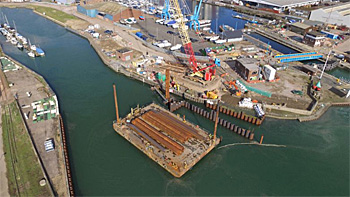 Construction work on the flood barrier in the port of Ipswich, UK.

According to Usborne a very busy period has started for what has been a long-running project. The big crane has to be assemble on an island in the middle of the harbour to lift the heavy gate into place.

One in 200 year protection
The Ipswich Flood Defence Management Strategy (IFDMS) will increase the standard of protection to 0.33 percent (greater than 1 in 200) and takes into account current climate change predictions. The 0.33 percent relates to the probability of a combined fluvial and tidal flood event happening in any year.

The new scheme will reduce the risk of flooding to 1,608 homes and 422 businesses and support key infrastructure.

This news item was originally published on the website of the Environment Agency.