On Wednesday 25 November, the tidal power plant in the Dutch Eastern Scheldt surge barrier has been put into service.

Turbine supplier Tocardo and constructor company Huisman installed five tidal turbines in an array. The turbines have a power out of 1.2 MW.

This installation is the largest tidal energy project in the Netherlands as well as the world’s largest commercial tidal installation having turbines in an array. 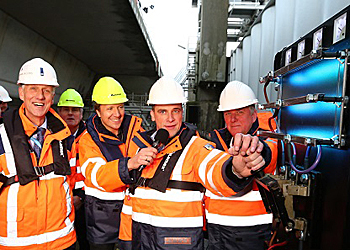 The commissioning was performed by chairman Diederik Samsom of the Dutch labour party.

"With our turbines in the Eastern Scheldt storm surge barrier, we can now show the world what tidal energy is all about: providing a clean and reliable source of energy that could fulfil 10-20 percent of the world’s electricity needs".

According to Breugel there is a worldwide tidal energy potential for more than 200 Gigawatt.

Focus on upscaling
Chairman Joop Roodenburg of Huisman’s board of directors says the advantages of tidal energy are evident. "Besides the fact that it is extremely predictable how much energy is generated – the tide is there every day – the turbines are installed in the water and will not be in sight such as wind turbines."

Roodenburg announced that his company will focus on upscaling of tidal energy installations. "However, this requires a large investment, a realistic rate for tidal energy and a touch of idealism."

In addition to the financial sponsoring of the project, Huisman was responsible for the design and the construction of the turbine’s suspension structure.

Market leadership
Together with Huisman, Tocardo aspires to be the market leader in tidal energy.

Earlier this year, the Den Oever-based company installed three linked turbines in the Afsluitdijk, a 30 km long primary sea defence in The Netherlands, with a total capacity of 300 kW.

Another Tocardo turbine in the Afsluitdijk has been providing electricity for over seven years now. Tocardo also deployed its first offshore floating project at the Island of Texel in The Netherlands.