The Dutch government has granted the Tidal Technology Centre Grevelingen 4.1 million euro for its initiative to build three testing channels for tidal turbines in Grevelingen, the Netherlands.

The grant is part of a 25 million euro package to stimulate the regional economy. The package also includes funding for a living lab research programme on integrated issues in river delta’s such as energy, flood protection and food security. 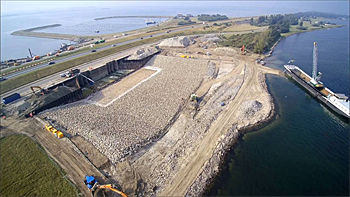 The Flakkeese sluice in the Grevelingen dam has recently been upgraded by Dutch national public works Rijkswaterstaat. Depending on the tides the water can now flow in either direction.

Research on tidal energy
The three testing channels will be located in an existing drainage sluice in the Grevelingen dam that connects lake Grevelingen to the Eastern Scheldt tidal bay.

The channels will include monitoring and datalog systems for developers of tidal turbines to test, demonstrate and certify their products.

It will also feature 4 demonstration turbines that will be made available to research institutes and universities for independent research.

The centre reports that it has 20 interested parties to use the test facilities.

Higher water speeds
Tidal turbines that are built in a dam or storm surge barrier operate under different circumstances than the ones in open sea.

Compared to a free-stream offshore setting, the speed of the passing water is much higher. On the other hand the differences between high and low tides are lower and there is limited space in the dam or barrier.

The centre aims to contribute to innovation and development of tidal turbine techniques for low head water streams.

The Tidal Technology Centre is expected to be completed in 2017-2018.

Impression of the planned Tidal Technology Centre for testing and demonstrating tidal turbines.