Dutch applied research institute TNO was one of the four winning teams that participated in the Global Innovation Challenge presented at the Saudi Water & Power Forum 2015.

Renewable-energy seawater desalination
H.E. Abdul Rahman Al Hussein, Saudi Minister of Water & Electricity, announced the winners. He said: "The undertaking by the Aramco Entrepreneurship and GE that promotes innovation in desalination using renewable energy is of strategic importance in addressing regional and global water scarcity. With energy accounting for nearly 70 percent of the desalination cost, identifying efficient, renewable energy solutions will have a long-term impact on the water sector, particularly in the GCC region." 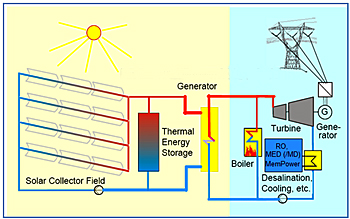 Scheme of the integration of TNO's MemPower membrane destillation process, driven by solar heat and producing both water and electricity.

Awards and partnerships for further development
The Global Innovation Challenge attracted 108 solutions on renewable-energy seawater desalination from 32 countries. The four winning teams were awarded cash prizes and the opportunity to collaborate with the two initiators of the challenge, General Electric Company, Aramco Entrepreneurship, to develop and deploy the winners' proposed solutions.

Al Hussein also said that the announcement of the winners "demonstrates the leadership of the Kingdom in identifying and promoting energy-efficient solutions that will benefit the water and energy industry globally. The competition also highlights that Saudi Arabia is not only a consumer of technology but also a developer of innovative solutions by partnership with others.”

About MemPower
MemPower is a new concept for decentral cogeneration of power an fresh water. It is based on the harvesting of the capillary energy during membrane distillation (MD). This allows the simultaneous production of electricity and fresh water from sea water - and waste water - and low grade heat. Power densities exceeding those of other water and energy technologies.

About the Global Innovation Challenge
The first global technology innovation challenge for Saudi Aramco and the fifth for General Electric, the competition awarded cash prizes and the opportunity to collaborate with GE, Aramco Entrepreneurship and others to develop and deploy the winners’ proposed solutions.

This news item was originally published on the websites of TNO (Dutch only), SaudiAramco and GE Middle East.