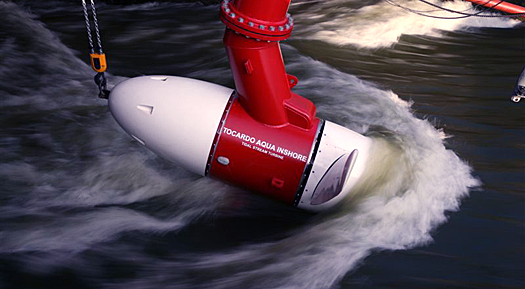 Nepalese energy specialist Glow Tech Solutions and Tocardo International, Dutch producer of hydro-power turbines, have
established a joint venture to set up an assembly and production facility for Tocardo turbines in Nepal.

The agreement follows a deal announced in June to sell 25 of Tocardo’s T100 water turbines to Glow Tech Solutions. The
patented turbines will be installed in Nepal’s fast-flowing rivers to produce electricity. Together they have a capacity of 2.5 Mega Watt.

Licenses for turbines up to 2.4 MW
The joint venture assembly and production facility will produce water turbines for the Nepalese market and for export in the region. Glow Tech Solutions acquired licenses to install water turbines with a total capacity of 2.4 MW and is expected to acquire licenses for an additional capacity of 7.4 MW. It completed pre-feasibility studies for 100 MW.

Ceremony in Kathmandu
The joint venture agreement was recently signed by Hans Van Breugel, CEO of Tocardo, and Subodh Tripathee of Glow Tech, at a ceremony in Kathmandu attended by the Minister for Industry of Nepal, Hon. Anil Kumar Jha, and the Dutch Consul, Mr. Rem Neefjes.

Milestone in large scale production
Commenting on the newly established joint venture, Hans Van Breugel said: "The joint venture signed with Glow Tech
Solutions represents a significant milestone in the large scale production of the Tocardo turbines. We are delighted to be working with Glow Tech and to be supporting the local economy in Nepal and are confident that together we will deliver the sustainable energy requirements for the region.”

Power shortage in Nepal
Ang Gelmu Sherpa, Chairman of Glow Tech Solutions added: "Tocardo’s technology provides a quick and cost effective solution for the current power shortages in Nepal and in the sub-region, thereby improving the quality of life in these countries. Through this partnership with Tocardo, Glow Tech Solutions now has the opportunity to facilitate the harnessing of the vast hydro-electric power potential in this region.”

This press release was originally published on the website of Tocardo.