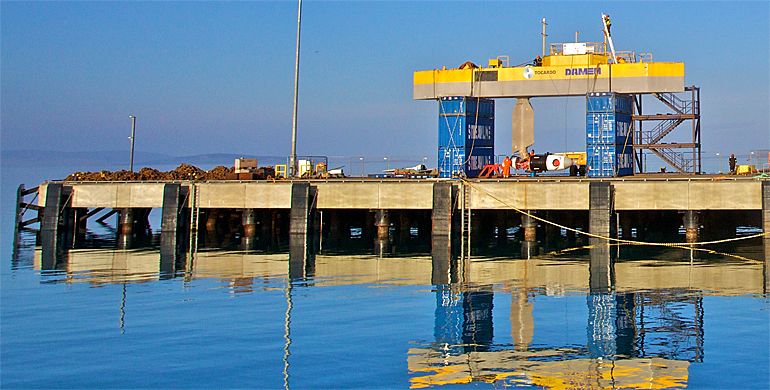 Dutch-based company Tocardo Tidal Power has entered the tidal scene in the UK with the InToTidal project kick-off and the arrival of Tocardo’s tidal turbine system in Orkney, Scotland

The system arrived at Hatston Pier in Kirkwall on 13th February (top photo) where it is prepared for deployment to the EMEC’s grid connected test side. 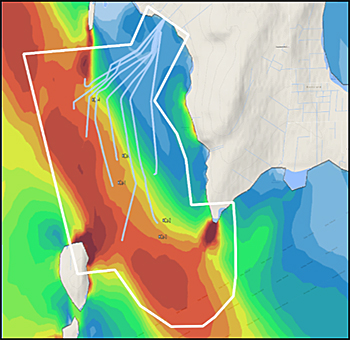 GIS map showing all the flow data, berth positions and bathymetry of the Falls of Warness tidal test site.

Led by Tocardo, the project brings together Orkney based companies EMEC and Leask Marine, and French research institute IFREMER.

Tocardo has already been working with international shipyard DAMEN, as well as Leask Marine, Bryan J Rendall Electrical and Aquatera in Orkney for the system deployment at EMEC’s tidal site.

Van Breugel continued: “Our work at EMEC is an important step in de-risking and improving Tocardo’s offshore tidal power technology. 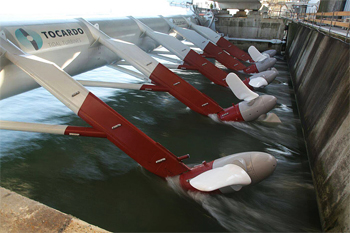 An array of five Tocardo tidal turbines in the Dutch Eastern Scheldt surge barrier that became operational in November 2015.

Increase installed volume
According to the CEO it is Tocardo’s benchmark to produce energy at the cost of offshore wind in the near future. “To be able to achieve this, the tidal energy sector needs to be enabled to increase the installed volume of equipment”, he said.

Van Breugel mentioned the Danish wind energy sector as a good example of industry growth. “A revenue based support mechanism, decreasing over time, has proved to be best in creating a new industry through market incentivisation”.

“Tocardo is ready to become one of the larger inward investment companies into the marine energy sector, with a strong operational and production base in Scotland and Wales. The UK is extremely well positioned as a maritime nation to create new jobs from the growing tidal energy industry.”

About European Marine Energy Centre (EMEC)
Established in 2003, The European Marine Energy Centre (EMEC) is the first and only centre of its kind in the world to provide developers of both wave and tidal energy converters – technologies that generate electricity by harnessing the power of waves and tidal streams – with purpose-built, accredited open-sea testing facilities.

Orkney is an ideal base for these testing facilities as the islands provide an excellent oceanic wave regime, strong tidal currents, grid connection, sheltered harbour facilities and the renewable, maritime and environmental expertise that exists within the local community.

About Tocardo
Tocardo is a Dutch company dedicated to delivering the best and most economical turbines to harvest energy from the world’s oceans and rivers. The Tocardo free-flow in-stream hydro turbines can be compared to ´underwater wind turbines´: free-standing underwater units, generating energy from sea currents and tidal and river flows.

This news item was originally published on the websites of Tocardo and EMEC.