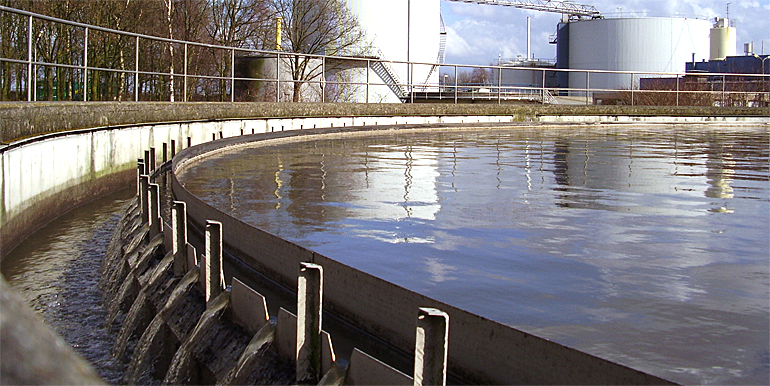 All Dutch households have access to clean drinking water and sanitation. Almost all waste water is treated. This gives the Netherlands a top ranking for the water themes of the Environmental Performance Index 2014.

The Environmental Performance Index comprises the performance of 178 countries on 20 environmental issues. The index is produced biennially by researchers at Yale and Columbia universities.

This year's edition was published at the World Economic Forum in Davos, Switzerland, on 25 January. 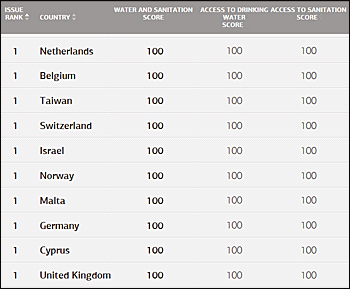 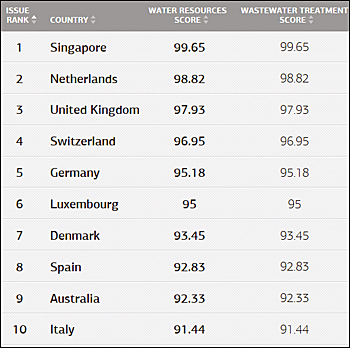 Overall environmental performance
Switzerland comes in at the very top of the 2014 EPI on all environmental themes. Luxembourg, Australia, Singapore, and Czech Republic round out the top five positions of the Index, which ranks countries on high-priority environmental concerns including air quality, water management, and climate change.

The Netherlands ranks 11th on the overall enviromental themes, scoring very high on health and water, but less on air quality, agriculture and fisheries.

New indicator for water treatment
The EPI has two indicators for water. The theme Water & sanitation tracks percentage of population with access to improved drinking water sources  and improved sanitation, including pit latrines and toilets.

This year Water resources has been added as a second indicator for the first time. It shows how well countries treat wastewater from households and  industrial sources before releasing it back into the environment.

As there was no single database that was comprehensive enough to develop a global indicator, the EPI research team made its own dataset.

The researchers hope to be able to add layers of specificity in the future as more refined data becomes available.

Afghanistan: big jump in access to drinking water
The global EPI-scorecard provides insight as to collective policy impacts on major environmental issues. Improvements have been made in many of the categories of the Environmental Health objective, including a steady increase of people that have gained access to improved drinking water and proper sanitation.

Some countries made a remarkable progress though. In Afghanistan alone, the percentage of households with access to clean drinking water went from 5 percent in 1991 to 61 percent in 2011.

Ethiopia has also been able to connect more of its villages to safe drinking water through investment from the  national government and international aid.

See the website for more information on the 2014 Environmental Performance Index (EPI).