A consortium of four Dutch firms has been asked by the Polish government to develop an integrated approach to improve the navigability on the Wisla river (top photo) between Warsaw and Gdansk.

The study will also include issues as flood risk, hydrology and spatial planning. 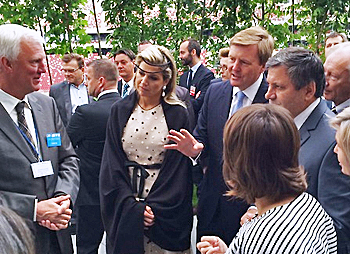 High level presence
The Wisla river study was one of the main topics during a forum meeting on innovative solutions in the Narodowy national football stadium in Warsaw.

The meeting was part of the programme of a Dutch trade mission on 24 and 25 June. 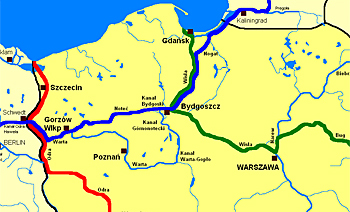 Improvement of the navigation on the Wisla is part
of a wider EU scheme to revitalise key waterways in Poland, connecting the North Sea (blue),
Adriatic Sea (red) and Black Sea (green)
with the Batlic Sea.

Revitalisation Wisla river
Wisla River is the longest and largest river in Poland. The river is not navigable for vessels with bigger draughts.

Particularly in the area of Warsaw, the river is usually too shallow to be navigated, meaning that commercial shipping is no longer possible.

To solve this problem, seventeen Polish municipalities in the vicinity have got together, asking the consortium to develop an integrated approach for the river area between Warsaw and Gdansk, also covering issues such as flood risk management, hydrology and spatial planning.

This news item is based on a press release by Deltares.