The Delft University of Technology and two Dutch engineering firms Royal HaskoningDHV and Iv Infra, are exploring possible designs for a flood barrier off the coast of Houston, USA.

A key element of the concept is a movable flood barrier that can seal off the bay near Galveston and Houston during a hurricane.

Recently the first concepts have been presented to marine science professor Bill Merrell of the Texas A&M University. Merrell is the developer of the 'Ike Dike' concept to seal off the bay near Galveston and Houston.

On behalf of the principals of Texas the concepts are now further examined on what would be the best type of barrier. 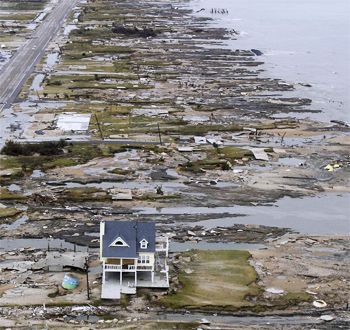 Enormous damage hurricane Ike
This month it will be exactly five years ago that Hurricane Ike caused enormous damage in and around Houston and Galveston in the US state of Texas on 13 September 2008.

With more than 38 billion US in damage and over 100 deaths, Ike ranks third in the list of the costliest hurricanes in US history.

But it could have been a lot worse. With more than two million inhabitants, Houston is not only the fourth largest city in the United States, it is also the centre of the oil and gas industry.

The Port of Houston fulfills a crucial economic role and generates around 178 million USD in revenues each year. Given the vulnerability of the area, it is a question of when rather than whether the city will again be hit by a major hurricane. This makes good coastal defences essential.

Ike Dike concept
Immediately after Hurricane Ike, Professor Bill Merrell of the Texas A&M University developed and unveiled the 'Ike Dike  concept. A key element of the concept is a movable flood barrier that can seal off the bay near Galveston and Houston during a hurricane. Under normal conditions the bay provides a passage to the Port of Houston, so it must remain accessible for shipping.

Another matter of great importance is the preservation of the ecosystems in the bay. Which types of flood barriers are buildable to protect the

Houston/Galveston area optimally against storm surges? This is the question that the Delft University of Technology, Royal HaskoningDHV and Iv-Infra are currently examining on behalf of principals in Texas. 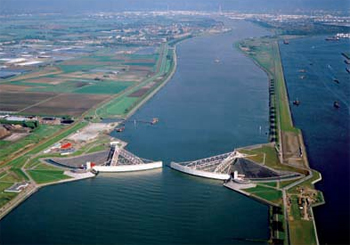 The Ike Dike concept is similar to the Maeslant
storm surge barrier that protects  the Rotterdam harbour, the Netherlands.

Detailing preferred variants
Over the past months the Delft University of Technology, Royal HaskoningDHV and Iv-Infra have worked out some flood defence concepts for closing off the approximately three kilometres long opening and have presented them to Bill Merrell and his team.

In terms of their dimensions the barriers are similar to the Maeslant and Eastern Scheldt storm surge barriers in the Netherlands.

The various concepts were compared with each other in respect of criteria like reliability, makeability, maintainability and life-cycle costs. The three parties will elaborate the preferred variants in greater detail in the coming period.

A joint research programme will also be set up between the Delft University of Technology and the Texan universities.

This news item was originally published on the websites of Delft University of Technology, Iv Infra and RoyalHaskoningDHV.

In perspective of building the Ike Dike, flood prevention specialist Piet Dircke of Arcadis explains on Houston's news station ABC13 the construction and role of the Maeslant storm surge barrier protecting the Netherlands.