The bay is relatively deep, but at the north end, near the city of Tacloban, the water becomes shallow and here the typhoon created a big storm surge that devastated most of this low-lying coastal city.

According to calculations made by research institute Deltares the storm surge must have reached over 5 metres. Tides and wave heights were not included in the calculations.

Super typhoon Haiyan (in the Philippines called Yolanda) made its first landfall just south of the city Tacloban on 8 November. Later it made landfall at other Philippine islands as well. Haiyan weakened down to a tropical storm and made its final landfall in Northern Vietnam close to the Chinese border on 11 November. 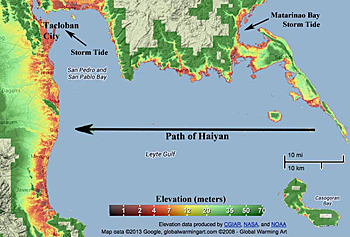 Just after Haiyan made landfall the wind turned northwest creating a storm surge in the shallow north end of the San Pedro Bay.

Specific situation in San Pedro Bay
Maarten van Ormondt of research institute Deltares made an animation of the surge levels, using the Delft3D computing model. "The typhoon passed just south of the San Pedro Bay and the specific situation in this bay made the storm surge to reach the exceptional height of over 5 metres. The ocean on the east coast of the Philippines, which is the main direction where the typhoons come from, is very deep. This makes the buildup of severe storm surges along most of the Philippines coast unlikely."

Exceptional storm surge
According to Van Ormondt the deep ocean water explains why the damage done by typhoons that hit the Philippines, is normally restricted because of heavy winds, heavy rains and landslides. In the case of Haiyan the exceptional storm surge had an additional devastating impact on Tacloban and the surrounding villages in the north end of the bay. 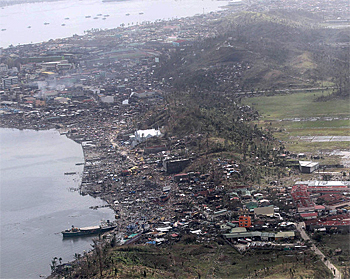 Most havoc was caused in the low-lying coastal
areas where - on top of the wind and rain - the
storm surge caused severe flooding.

Tsunamis as in the Gulf of Bengal in 2004 (up to 10 m) and off the Japanese coast in 2011 (up to 21 m) can cause extreme floods. The storm surges caused by typhoons are less extreme but can still raise up to 12 m, as was the case in New Orleans when Katrina hit the city in 2005.

Unlucky places
"Most of the east coast of the Philippines is not really at risk from severe storm surges", remarks Van Ormondt. "But specific locations, like San Pedro bay, can be unlucky places with a potential to be hit by a surge. The storm surge that hit Tacloban was exceptionally high because of the extreme high wind speeds and the shape of the bay, which acted like a funnel".

The peak surge coincided with a low tide. Van Ormondt: "If it had coincided with a high tide, the maximum water levels would have been almost 1 metre higher, leading to even greater devastation"

The model shows maximum surge levels over 5 metres near Tacloban City (tides were not included).