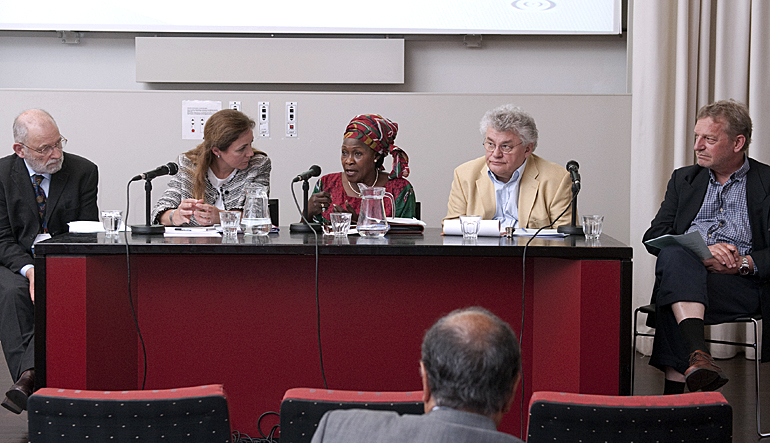 The first Water Integrity Forum came to a successful conclusion with the Ugandan Minister of State for Water Resources, Betty Bigombe (middle) and Kitty van der Heijden, Ambassador for Sustainable Development of the Dutch government (second left) announcing that their countries will take a lead in the global agenda of water integrity and the fight against corruption.

Both Bigombe and Van der Heijden promised they will put water integrity on the agenda of the 2013 Budapest Water Summit, 8-11 October in Budapest, Hungary.

Fight against corruption
For the first time experts from all over the world openly discussed the problems of corruption. Many emphasized the complexity of the issue that sometimes is rooted deep in an organisation.

Reactor Andreas Szöllösi-Nagy pointed out that bribery has two sides. He mentioned the funding of water projects by developed countries.. It is not only the responsible of the developing countries to see to it that the money is pend well, the donor countries that give the money have a responsibility too, he said.

Ugandan water minister Betty Bigombe  called for more integrity within the water sector. "We must not only blame. That creates a defensive reaction. We must create a positive attitude by strengthening integrity".

Towards a universal code of conduct
The Water Integrity Forum released a draft statement after intense consultations with the Forum participants who agreed to it in principle.

One of the highlights of the statement called for moving towards a universal code of conduct for individual and institutional behaviour.

The Forum brought the problem of corruption out of the closet into the open and raising the stakes to address this challenge.

This news item is based on a press release originally published on the website of Water Integrity Network.
Photos copyrights: Hans de Lijser

A tutorial presentation of AWIS to put it to practise