Through SNV’s SSH4A programme, DFID aims to improve and support the sanitation situation of more than 2 million people across nine countries in Asia and sub-Saharan Africa.

High quality services
SNV chief executive Allert van den Ham said that by building upon the organisation’s track record of delivering high quality services, the partnership would enable a tripling of SNV’s WASH outputs: "In recognition of SNV’s results in WASH, we are pleased that DFID has chosen to partner with us on the SSH4A over the coming four years."

Van den Ham: "This represents a growing trend where key development actors are choosing to support SNV programmes given our proven strengths in capacity building, evidence-based advocacy and working with both local governments and the private sector to improve health and wellbeing in their communities." 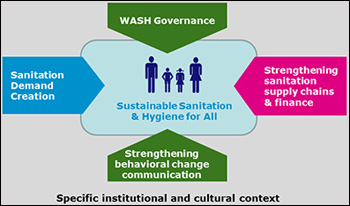 About SSH4A
Developed since 2008 in collaboration with IRC International Water and Sanitation Centre in Nepal, Bhutan, Cambodia, Vietnam and Laos, SSH4A is a comprehensive, local government-led approach that takes sanitation beyond the community, working towards district-wide coverage and taking change to scale.

SNV’s multi-donor SSH4A programmes are now implemented with rural communities in 15 countries across Asia and Africa. The programmes have already reached more than 2.2 million rural people in Asia alone, enabling over 700,000 people to act to improve their sanitation situation.

This news item was originally published on the website of SNV.

A report on one of the first open defecation free villages in Karnali, Nepal.