Royal Navy’s flagship, aircraft carrier HMS Queen Elizabeth, sailed into her home port of Portsmouth for the first time on 16 August. The ship berthed at the upgraded jetty which will be home to both of the Royal Navy's new aircraft carriers.

VolkerStevin has designed and rebuild the jetty. Deepening of the port entry for the huge aircraft carriers involved Boskalis Westminster. 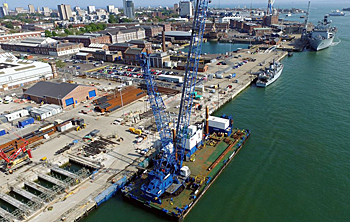 Upgrade of the jetty by VolkerStevin.

Overhanging flight deck
The upgrade by VolkerStevin of the original middle slip jetty was needed as a direct consequence of the size and extent of the overhang of the flight deck beyond the vessel hull.

A total of 3.2 million cubic metres of sediment, equivalent to 1,280 Olympic swimming pools has been removed.

Infrastructure package
The Defence Infrastructure Organisation (DIO) has worked with VolkerStevin and BAE Systems to deliver the package of infrastructure needed for the carriers.

The jetty upgrade and the dredging was part of a 100 million UK pound infrastructure package by the Royal Navy.

The Royal Navy’s second aircraft carrier in this new class, HMS Prince Charles, is under construction and will soon join the HMS Queen Elizabeth at the jetty in Portsmouth.

This news item is based on press releases by the Royal Navy on the arrival and on the completion of the jetty.

Arrival of the HMS Queen Elizabeth at its home port in Portsmouth and berthing at the new jetty for the first time. 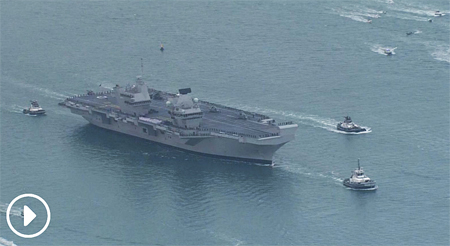