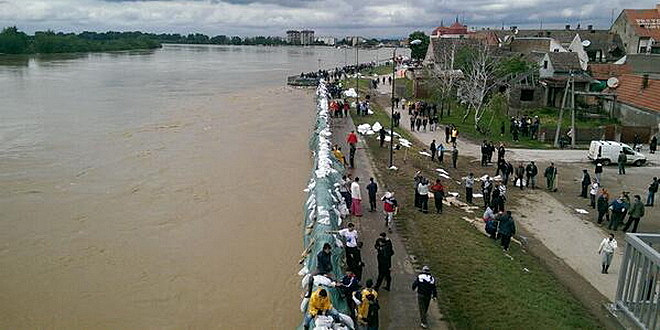 The United Nations Disaster Assessment and Coordination Organization UNDAC sent an emergency response team to the flooded areas in Serbia on 18th May.

One of the team members is Dutch flood expert Mathijs van Ledden.

Within the team he is responsible for assessing river levees and advising on flood emergency measures, especially for the extremely swollen Sava River. This river copes with a large part of the enormous amount of rainfall that hit Bosnia and Western Serbia over the past few days. 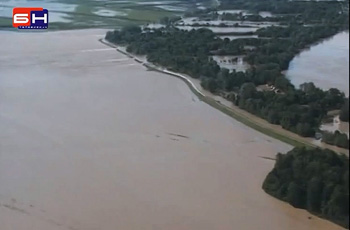 Serious levee breaches along the Sava river (right)
near the town of Batkovic, Serbia.

Van Ledden has already visited a power station along the Sava River, where he inspected the levees around the plant. He advised an emergency team that staged sandbags to protect the plant from floodwaters.

Coordination of pump capacity
Van Ledden also advises the Serbian authorities on the handling of the mobile pump capacity that is being brought in by foreign countries.

"The Serbs have no experience with the coordination of this type of international aid ", says Van Ledden, who is in Belgrade where the UNDAC-team is situated. "I am also giving advice on where the additional pump capacity can be deployed most effectively, depending on the expected water levels. "

Van Ledden was selected by UNDAC last year to join its emergency response teams to be deployed during and after natural disasters worldwide.

Van Ledden expects the UNDAC-team to remain in Serbia until at least the end of the week. 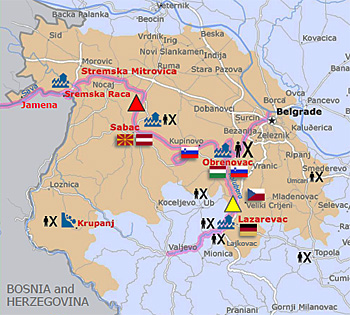 European countries have deployed pumps and boats to flooded areas along the Sava and Kolubara Rivers, which merge near the flood-stricken city of Obrenovac in Serbia. (Source: Reliefweb

Burst embankments
Parts of Bosnia and Serbia declared a state of emergency on 18th May after three days of heavy rains. Initially the rain caused many landslides, but now the focus of the disaster has moved on to the swollen fast-flowing rivers.

Rivers broke out of their embankments at several locations. In some areas the downstream river levels are still raising.

Authorities are calling the flooding the region’s worst in 120 years. The floods have so far claimed more than 35 lives. Bosnian officials have reported up to 500, 000 evacuees while Serbia reports around 25,000.

Serious levee breaches along the Sava River (right) near the town of Batkovic, Serbia.

Severe flooding in Karljevo, Central Serbia, along the Ibar river.