University of Twente announced its leadership of the RiverCare research programme on intelligent river management.

The programme aims at self-sustaining multifunctional rivers and focusses on the consequences of measures on a river.

Other participants in RiverCare are universities of Utrecht, Nijmegen, Delft and Wageningen, as well as various research institutes, companies and government bodies, such as the Directorate-General for Public Works and Water Management.

RiverCare is granted by Netherlands Organization for Scientific Research (NWO). 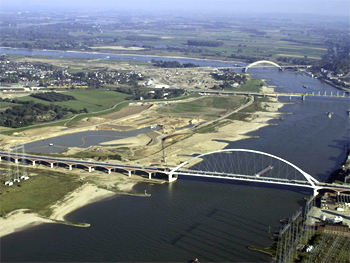 One of the largest Room for the river projects in progress is the dike relocation and construction of a secondary channel along the Waal near Nijmegen, the Netherlands (photo: Dura Vermeer)

Long-term outcome unclear
Dutch rivers are substantially restructured. Rivers have lost space, the ground behind the dykes has sunk and it rains more often. The risk of flooding is therefore greater.

Directorate-General for Public Works and Water Management (Rijkswaterstaat) is taking drastic measures, but the long-term outcome of this is often unclear.

The RiverCare research programme is seizing upon this development.

Greater control of rivers
Professor Suzanne Hulscher from the Department of Water Engineering and Management (WEM) of the Faculty of Engineering Technology (CTW) is responsible for the management of RiverCare: "We measure exactly what the consequences are of particular measures on a river".

"At the moment, this does not happen often enough. Managing rivers costs a lot of money. We can tackle this management much more intelligently if we know what happens. This produces enormous cost savings", relates Professor Hulscher.

Room for the river
River Care will, for example, be used for the Dutch national Room for the River project. At more than thirty locations along the Rhine, IJssel, Waal, Lower Rhine and Lek, interventions such as dyke relocation, floodplain excavation, floodplain widening and water storage are taking place.

Following the problems with high water in 1993 and 1995, the government launched a number of programmes to improve the protection from flooding for the more than four million Dutch people living in the river basins.

Hulscher: "We don't really know what happens subsequently with the bed, banks and floodplains. Thanks to RiverCare, we can gain control of the changes to the rivers during the coming ten to fifty years, both physically and biologically.” 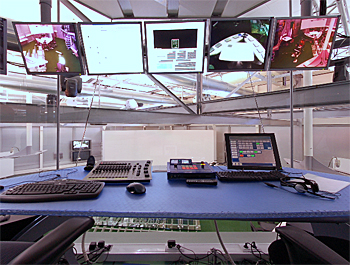 Virtual River
Within the project, the Virtual Reality Lab of University of Twente is working on a virtual river, showing what the consequences are of certain measures.

The use of serious gaming gives insight into the future.