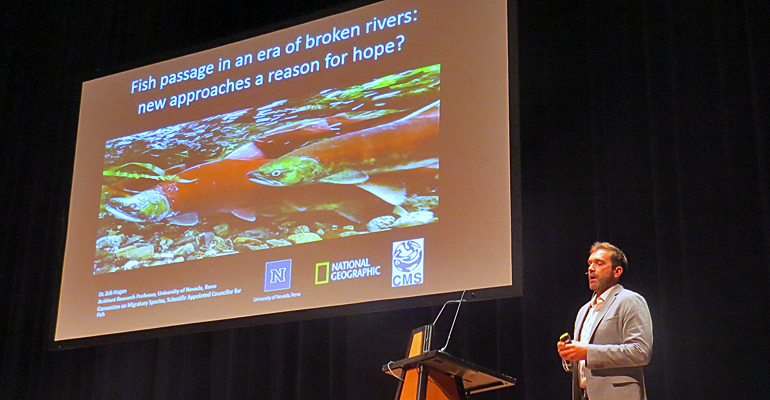 "We need a red list of endangered fish migrations", urged professor Zeb Hogan of University of Nevada-Reno in his opening key note of the 5th edition of the Fish passage conference. Hogan advocated such a list to enable a global respond to critical situations where fish migration has dropped dramatically.

In his key note Zeb Hogan told his audience that fish passages are not only about fishing or endangered species, but also about providing connectiveness on rivers in order for fish to reach their spawning grounds. "We need to balance the need for water on the one hand, and maintain a minimal river ecosystem on the other", Hogan said.

The conference takes place in Groningen, the Netherlands and started on 22 June. It is the first time the conference is held in Europe.

Era of broken rivers
As an aquatic ecologist Zeb Hogan is known for his contribution to reports by National Geographic on the world's largest fresh water fish. In his key note on the 'era of broken rivers' Hogan showed videos of his exploration upstream of the Mekong river, looking for the last species of the Mekong giant cat fish that can weigh up to 300 kilogram. "Around the world there are only thirty species left of large fresh water fish that weigh over 100 kilogram. These fish migrate over long distances and encounter a growing number of obstacles." 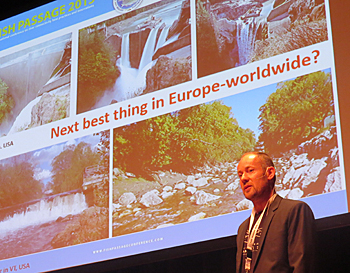 Organiser Herman Wanningen announced the next World Fish Migration Day on 21 May 2016.

Impact of hydrodam on migration
Hogan expressed his concern on plans to construct hydrodams upstream of the Mekong river. He showed understanding for the need for energy, but critized the fact that no assessments have been made of the impact on fish migration. "The Mekong river provides fish for the largest inland fishery in the world. This fishery may be at stake if certain species are unable to migrate freely up and down the river."

"I notice there is concern about the growing number of hydrodams and the effects for fish migration. In many places there is too little knowledge to raise a discussion on the possible consequences of these dams. With a red list of emdangered fish migration, we would know where migration is critical and a rapid response team can deliver expertise to find alternative solutions", Hogan suggested. 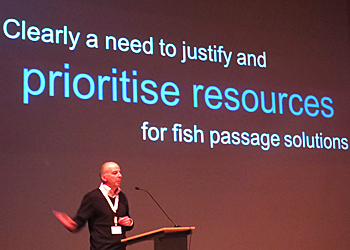 This was specially addressed by Jim Gregory (on photo left) of the British Environment Agency who told of a national team that has been formed to deal with the 'though stuff'.

Presenters advised always to consider the whole connectivenss of the river as it makes no sense to remove obstacles randomly. To allow migrating fish to return to its spawning ground, means the removal of carefully selected obstacles to give free access, not only upstream, but also for the young fish to go downstream to the sea.

Last remaining obstacles Rhine river
A good example are the last remaining weirs and hydrodams of the river Rhine. Although the ministers of the riparian states along the Rhine river agreed in 1987 on the return of the migration of the salmon, this still has not been realised.

A special session on fish passages in the Rhine showed that although some 340 fish passages have already been constructed, it is a handfull of remaining obstacles that prevents a fully free passage from the North Sea up to the Basel, Switzerland.

Eddy Lammens of the expert group fish of the International Rhine Commission explained there is still a lot to do. "As the water quality has significantly improved, projects have started to restock salmons at spawning places. As many fish passages have been constructed some migration can be observed now. However, at this moment only one out of 1000 restocked salmon makes it to the North Sea and back. It would take at least 10 upto 40 out of 1000 to speak of a real return of the salmon migration on the Rhine". 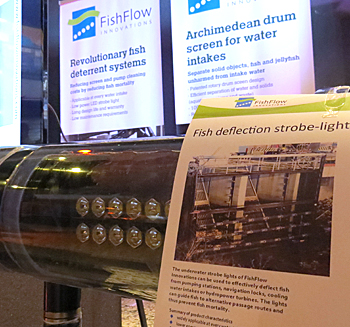 Potential solutions where shown at the exhibition, such as an underwater strobe light developed by FishFlow.

Downstream migration even bigger problem
Lammens also addressed the subject of a free downstream passage for young salmon returning to the North Sea. "Downstream problems are even bigger as young fish gets caught in the turbines of the hydropower stations."

The expert group of the International River Commission has planned a special meeting on this matter.

The conference made clear that downstream fish passage technologies are less advanced compared to upstream technologies such a vertical slot or denil ladders.