Every river delta on earth is different, but what they have in common is an interaction between water, land, people and nature. Physical geographer Esther Stouthamer of Utrecht University, the Netherlands, is curious about this interaction and is examining how management of a river delta can be optimized.

That is why Stouthamer and her colleagues initiated earlier this year the Future Deltas research programme, one of Utrecht University’s eleven research focus areas.

A short interview with Stouthamer was released on the occassion of the annual Earth Day on 22 April. 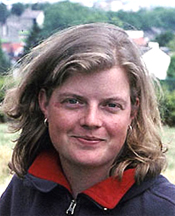 A firm mark
"A delta is an area through which a river originating in a higher region flows and then discharges into open water", explains Dr Stouthamer in her office. ‘"These areas are found all over the world: consider the Mekong Delta in Vietnam, or the Mississippi Delta in the US, but also the Rhine-Meuse delta in the Netherlands. Humanity has firmly left its mark on many of these deltas. We’ve built cities, changed and stabilised river courses, changed the uses of land and water, and extracted water, oil and gas from the subsurface.

"All these activities have significantly accelerated natural subsidence processes, and this can have major consequences for the people who live there. As well as examining the subsurface, our research is also looking at humanity’s impact on subsidence and the consequences of this for society."

25 centimetres of subsidence a year
Subsidence is a major problem all over the world. For example, the ground beneath Jakarta in Indonesia is subsiding by up to 25 centimetres a year. And buildings, infrastructure and millions of inhabitants obviously cannot survive that much subsidence. According to Stouthamer, "Subsiding areas face a higher risk of flooding, poorly working sewers and sometimes even exploding gas pipes." 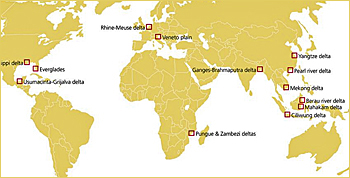 Responsibility for damage
"The ground in the Netherlands is also subsiding", continues Stouthamer. "There’s confusion about who is responsible for the resulting damage. The government? Municipal authorities? People themselves? To avoid this confusion, we need to understand what causes subsidence and to improve the way we manage it."

The research programme involves several scientists. "We’re working with Marleen van Rijswick, Professor of European and Dutch Water Law in the Faculty of Law, Economics and Governance. Our team also includes biologist George Kowalchuk of the Faculty of Science so that we can incorporate biological processes that contribute to subsidence and the associated changes in ecosystems into our research. And of course we’re also collaborating with other social geographers and environmental scientists in the Faculty of Geosciences." 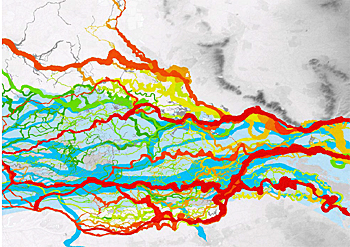 Multi-layer map of Rhine delta with its flood plains in the early holocene (blue), middle holocene (green) and its current (red) floodplains.

Virgin territory
As Stouthamer explains, "I’ve been studying deltas throughout my career, and that’s the reason I started this project. There’s already a lot of research into deltas being carried out at Utrecht University, but not on this scale. I’m planning to integrate all the mono-disciplinary studies into a major, interdisciplinary research discipline. This type of delta research is almost virgin territory, and I see many challenges ahead."

Future Deltas organizes a special session, entitled 'Deltas – from multiple pressures to integrated solutions', on the 36th IAHR World Congress, which will be held in Delft/The Hague, the Netherlands from 28 June-3 July 2015.

This news item was originally published on the website of Utrecht University.