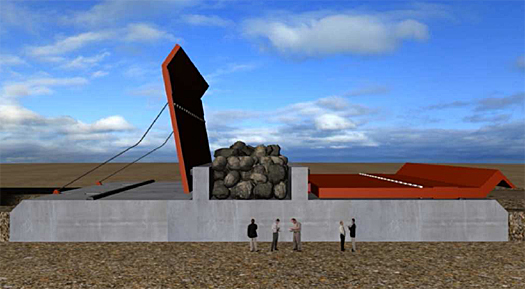 Existing tsunami barriers are fixed
Underwater tsunami barriers aren't new—many countries have installed them off important coastal areas to absorb the force of the waves. But these structures, which are fixed in place, aren't always effective; in Japan, the world's deepest barrier, a one-mile-long structure across the mouth of Kamaishi Bay, was largely destroyed in the March 2011 earthquake and tsunami.

Activated in advance of destructive waves
Van den Noort says its design would solve many of the problems of existing barriers, which can't be used at the mouth of a river or harbor outlet because they interfere with shipping and marine life. 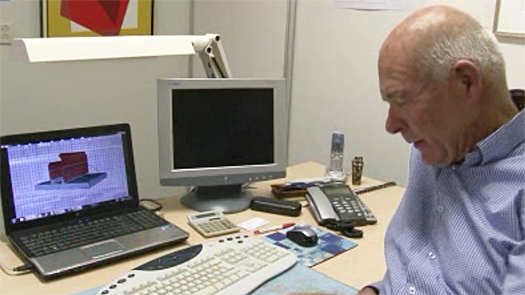 The 'Twin-wing Tsunami Barrier' lays flat on the sea bed and is activated when waters recede from the shore in advance of destructive waves. The receding "negative tsunami" causes one wing of the barrier to swing up and trap a pool of water. As the "positive tsunami" wave approaches, a second, larger wing is deployed to block and reflect the wave back out to sea—all without human intervention.

Tested in hydraulic labs
The firm has completed a draft design of the barrier, which has been tested in hydraulic labs. Van den Noort says it is in talks with Thailand's government to build a barrier off Patong Bay, which was heavily damaged in a 2004 tsunami.
"It somehow looks a little bit crazy, but I think it could work," says Willi Paul, global head of power research for ABB Ltd., and an Innovation Awards judge.

See all winners of the WSJ technology innovation awards 2012 in the different categories: www.online.wsj.com