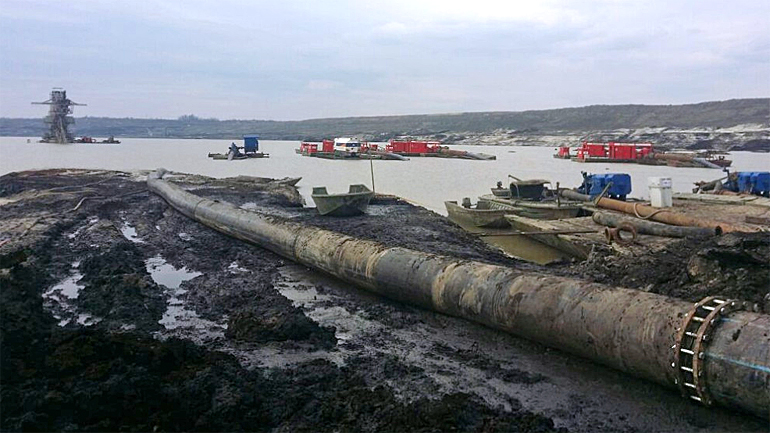 Late April Dutch company Van Heck Group redeployed its 20 mobile HK700 pumps from the open pit coal mine Kolubara in Serbia. For eight months the pumps had been operational and removed a record amount of 150 million cubic meters of flood water.

On 16 May 2014 the Serbian open pit coal mine was flooded in a few hours, following exceptional heavy rain fall in the whole Balkan region. 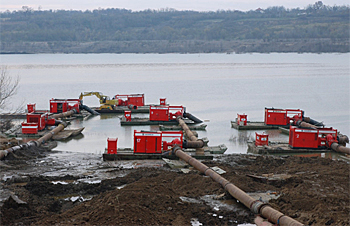 Large artificial lake
In May 2014 extreme rainfall caused many floods in the Balkans. The situation along the Sava and Kolubara rivers soon became critical and on 16/17 May the biggest pit of the Kolubara mines flooded. In a few hours time some 200 million cubic metera  flood water poured in the 70 m deep pit.

Initially a number of regular drainage pumps were installed to dispose of the artificial lake. Soon it became clear that this would take too much time, as the coal mine supports a quarter of Serbia's electricity production.

With a loan from the World Bank, pit owner Elektroprivreda Serbia (EPS) tendered a larger pump project in August. The tender was won by Energotechnika Juzna Backa that subcontracted Van Heck to provide its large HK700 pumps.

Van Heck immediately deployed 20 pumps and 7 km of pipes. By late April 2015 the pumps had made a total of 40.679 operational pumping hours.

EPS is expected to resume the mining activities in its largest pit as soon as the top soil is dry. 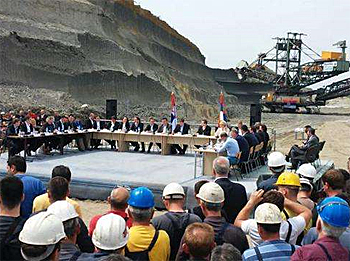 To mark the importance of the recovery, Serbian prime minister Aleksandar Vucic celebrated his first anniversary in office in the open pit of the Kolubara coal mine on 27 April 2015.

Specialised for the job
Van Heck was subcontracted as it is specialized for the job. Only a few months earlier, in February 2014, the company drew worldwide media attention with a line up of eigth HK700 pumps in Dunball, Somerset Levels, UK.

Here Van Heck had been involved in a six week operation by the Environment Agency to pump 65 million m3 of flood water back into the sea.

In the British media the pumps became known as the Dunball giants.

Biggest operation ever
Although Van Heck deployed the same amount of pumps to Serbia as to Somerset Levels, emptying the Kolubara mine was a far bigger job as over 150 million m3 of flood water was removed.

The size of the operation is also illustrated by the number of trucks that were needed to deploy all materials to Serbia. According to Van Heck it took up to 150 trucks to transport all equipment.

Next to the pumps, some 7 km of large pipes were needed to pump the flood water back into the Kolubara river.

A video of the pumping activities in open pit coal mine of Kolubara, as released in January 2015.