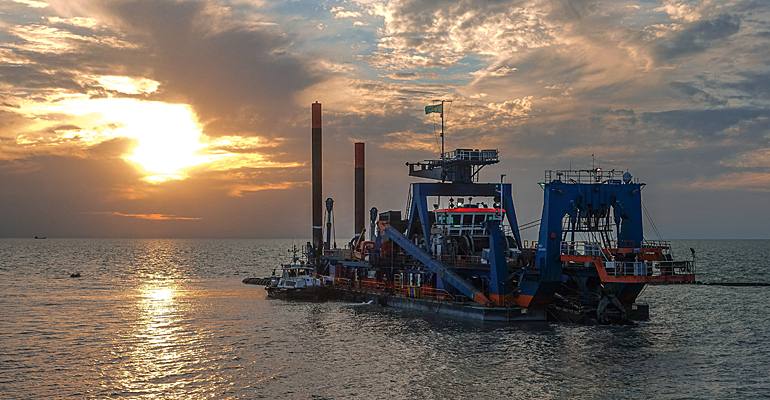 Dredging company Van Oord recently finished their dredging operation on a 72-kilometres-long channel in the Caspian Sea. Four years of dredging at an extremely remote location have concluded.

Van Oord built the new access channel to the port of Prorva to allow for transportation of construction modules to the Tengiz oil field in Kazakhstan, where new facilities are being erected to increase the production capacity. 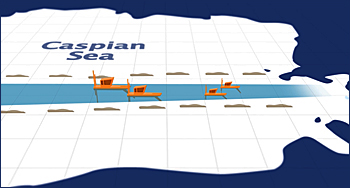 Four dredging vessels operated in formation, depositing the sand in small islands on each side of the channel with enough space in between to allow seals to migrate

Unusually complex logistics
In many ways, the dredging work in the shallow northern part of the Caspian Sea was remarkable. Especially the logistics were unusually complex.

The length of the new channel demanded detailed advance planning to enable the work to go on 24/7, and to minimise transport activities for the dredging vessels and their support equipment.

Furthermore, the remoteness of the location and the limited facilities required resourceful measures during project execution. Due to the harsh winters, dredging was only possible between April and October.

‘The remoteness of the region was challenging, and I am proud of our people’s perseverance and professionalism in making this project a success’, said Govert van Oord, Area Director Europe. 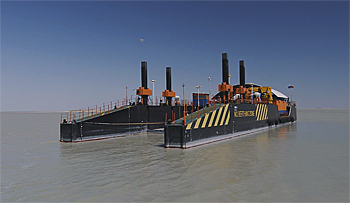 In-situ repairs
Four cutter-suction dredgers, including the Ural River and Mangystau, have worked in formation to get the job done, assisted by more than 30 support vessels.

To allow for in-situ repairs and maintenance of the support vessels, Van Oord designed and built a floating workshop barge complete with shiplift facility, hydraulic crane and on-board workshop.

Preserving wildlife
The area where the dredging took place is home to various endangered species, such as various birds and seals.

Van Oord cooperated with independent wildlife observers in order to protect the local flora and fauna. In addition, 32 sand deposit sites were created alongside the access channel, 16 of which form islands to which animals are already finding their way to rest and breed.