Dredging company Van Oord has been awarded the contract for constructing land at the port in Surabaya, Indonesia. An industrial estate will be built on the new land.

The client is a public-private partnership that includes the port authority. The contract value is 20 million euro. 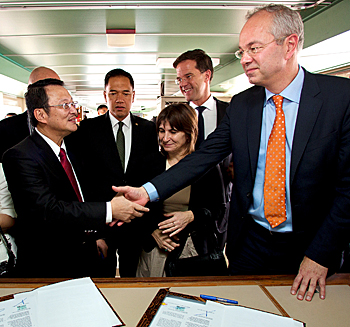 The contract was signed in presence of Dutch prime minister Mark Rutte (back right).

Marine engineering challenges
The contract was signed on board the trailing hopper suction dredger HAM 310 at the Port of Tanjung Priok in Jakarta in the presence of Dutch Prime Minister Mark Rutte and other dignitaries.

Prime Minister Rutte is currently leading a trade mission to Indonesia that is primarily intended to bolster cooperation between Indonesia and the Netherlands in the field of marine contracting. 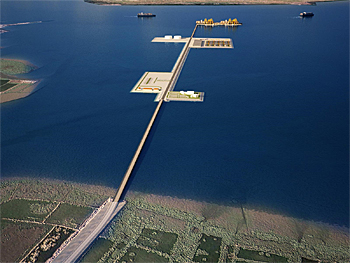 Construction of five islands
Work on the project will start in December 2013 and will continue until spring  2014.

The project will involve dredging 4,000,000 m3 of sand from the sea bed and using it to construct five islands with a total area of 220 hectares.

The contract will also include the installation of rock. Van Oord will be deploying a large trailing suction hopper dredger on the project.

Second port contract in Indonesia
Van Oord is also involved with the installation of a polder island that is intended for use in the expansion of the city of Jakarta in connection with the Kapuk Naga Indah development plan. On Sumatra, Van Oord is maintaining the access channel to the Port of Bengkulu.

This news item was originally published on the website of Van Oord (in pdf).