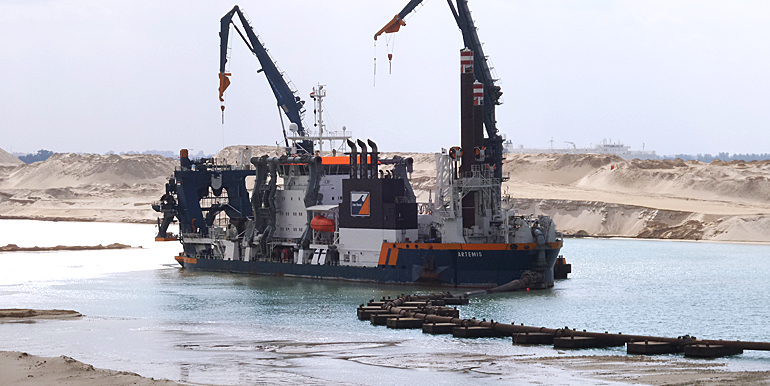 This fleet will gradually be expanded with an additional cutter that is under way and a hopper that is expected to arrive within a few weeks.

Two way navigation
The contract includes the construction of the parallel section of the canal with a length of approximately 50 kilometers to allow ships to simultaneously transit in two directions as well as the widening and deepening of a number of existing sections to a depth of 24 meters.

Fleet of 20 dredgers
Van Oord's fleet is part of a total of 20 vessels that will eventually be operated by a consortium consisting of Van Oord (Netherlands), Boskalis (Netherlands), National Marine Dredging Company NMDC (Abu Dhabi) and Jan de Nul (Belgium).

This international consortium is one of the two contractors for the New Suez Canal dredging scheme, launched by the Suez Canal Authority in August last year.

The whole project is estimated to be worth over 2 billion USD. The implementation period is only 10 months.