Dredging company Van Oord has been awarded a contract for dredging and maintenance work for the western access channel to the port of Surabaya in Indonesia.

The client is Indonesian port company PT Pelabuhan Indonesia III (Persero). The contract is worth over EUR 50 million.

Project execution will start in May 2014 and will last 10 months, followed by a two-year maintenance period. 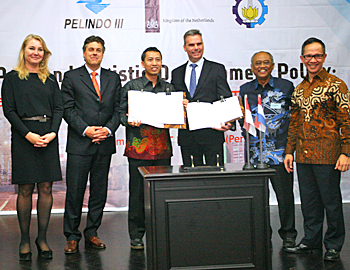 Removal of silt and ship wrecks
The project involves widening the existing channel to 150 metres and deepening it to -13 metres. A total of more than 10 million m3 silt will be removed and dumped at sea. Furthermore, one or two shipwrecks must be removed.

Annual maintenance for a two-year period is part of the contract. Van Oord will be deploying a large and a medium-large trailing suction hopper dredger.

Second contract in Surabaya
Surabaya is the second largest city in Indonesia and is an important port. The widening and deepening of the access channel will boost further economic development of the port.

This contract is the second assignment for Van Oord in Surabaya. In November 2013, in the presence of Dutch Prime Minister Mark Rutte, a contract was signed for the construction of a business park.

Van Oord has been working in the port of Surabaya since 1911. The original project involved making the port accessible to vessels with a deeper draught and constructing quay walls. 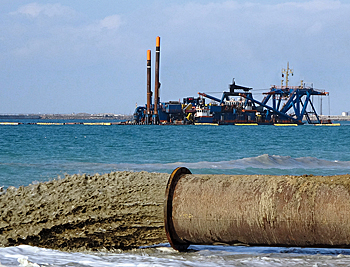 Van Oord is also involved in the construction of a reclamation island intended for the expansion of the city of Jakarta as part of the Kapuk Naga Indah development plan.

In Surabaya, Van Oord is currently working on the construction of a business park, the Java Integrated Industrial Port Estate, and the expansion of the harbour for the Manyar Port Terminal.

On the island of Sumatra, Van Oord is carrying out maintenance on the access channel to the port of Bengkulu.