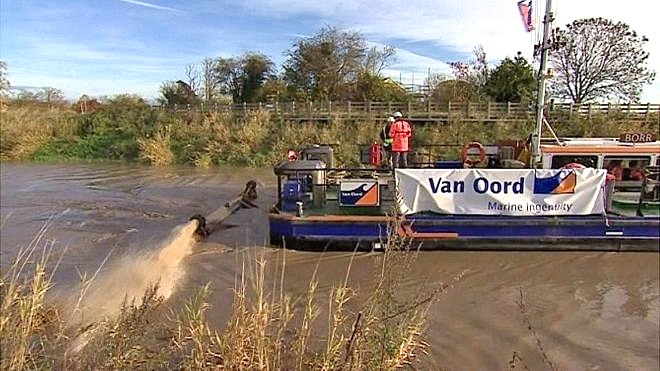 Van Oord and the Somerset Rivers Authority are working in partnership to test new techniques which may provide cheaper and better ways of maintaining tidal rivers. The trials started on 14 November.

Three weeks of trials are being carried out on the tidal river Parrett to see whether ‘water injection dredging’ and ‘agitation dredging’ can effectively move silt downstream to Bridgwater Bay.

Along the trials section of the River Parrett, there is 150 percent more silt than there was in April, and in places this increases to four times as much. 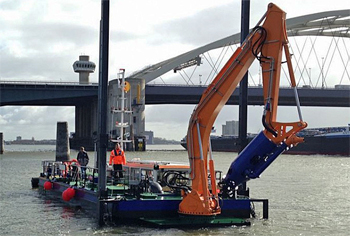 Water injection dredging
The two new dredging methods stir up the river silt so it gets carried downstream. One method involves blasting water near the riverbed to stir up silt.

River water is pumped through the injection bar towards the soft silts in the riverbed, which become ‘super-saturated’ and more separated.

A screen on board of boat shows the relative positions of bed and injection point, making it possible to see what effect work is having, and to raise and lower the injection bar, and vary the pressure and volume as required for maximum effectiveness.

Agitation dredging
The other method being trialled, ‘agitation dredging’, uses an articulated arm with a cutting device which rotates, and a suction hose. As the cutting head moves towards its target area, mud and water are vacuumed up, and blown back out into the top of the river. The idea is that silt is given much more time to carry before it drops down again and settles.

Less local impact
Jasper Blaauw, from Van Oord, mentioned the advantages of the new methods with significantly less impact on local people and the natural environment, compared to traditional dredging with excavators that take the silt out and trucks have to transport the silt to a deposit site.

He said: “Our boat has been sat here for over a week, and no-one has noticed it. There is no noise issue – people have been walking their dogs or riding horses without being disturbed.

“Water injection dredging has a much lower impact than six or seven trucks and a crane. This is the culmination of 25 years of research and development.” 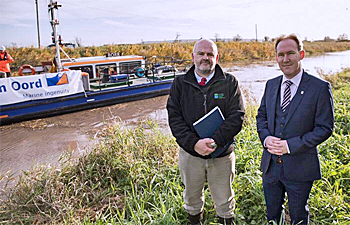 Detailed monitoring
According to Councillor John Osman at Somerset Rivers Authority (SRA) it is the first time that such trials have been done on the Parrett in conjunction with a long-term programme of detailed monitoring.

Osman: “Potentially, these new methods offer big benefits: done at the right times, in the right places, they could be much cheaper, more effective, and better for the environment, local residents and farmers.”

If the trials are successful this could pave the way for vital maintenance of the Somerset Levels and Moors to be carried out in a way which provides better value for money for Somerset taxpayers and reduces disruption for residents.

The trials aim to get a better understanding of where silt goes and the best ways to keep it moving.