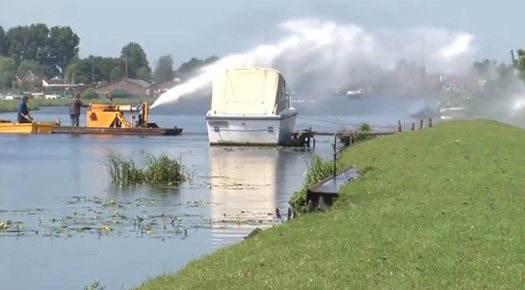 The Dutch water authorities have developed a new method to prevent the failure of peat dikes during dry periods.

In the Netherlands there is more than 16.000 km of dikes. Many are situated along the inland waterways and about one fifth consists mainly of peat.

These dikes are especially vulnerable to drought. Dry peat dikes are light and porous and can easily loss their stability.

During the spring of 2011 this new method proved itself for the first time during a very dry period.

Rijkswaterstaat and Stowa (Dutch acronym for the Foundation for Applied Water Research) made a short documentary about this new inspection of peat dikes in the Netherlands.

Three different situations
Filmed at three different locations and three different water authorities fighting the effects of dry weather on so called boezem-systems: these are waterways above the surrounding land enclosed by boezem-dikes. These systems are especially vulnerable to drought which can lead to flooding of an area if a dike fails.

The development of the new method is one of the projects of the Programma Professionalisering Inspectie Waterkeringen (PIW).