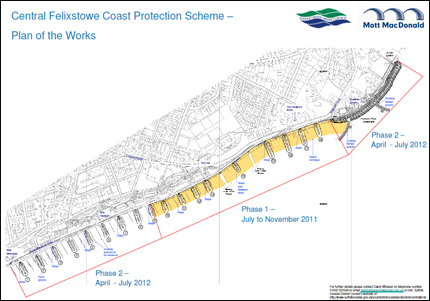 Volker Stevin’s marine experts are currently present on the coast near Felixstowe in South East England, for the implementation of a coastal protection plan. The plan will provide protection to more than 1,500 homes, local businesses and other major facilities in the central part of Felixstowe.

Eighteen breakwaters
The order of 8 million pounds by the Suffolk Coastal District Council, comprises the construction of 18 breakwaters consisting of boulders, and the raising and widening of the beach with sand and gravel.

Additionally Volker Stevin will construct a retaining wall of rocks, including a boardwalk construction and increasing accessibility by stairs and ramps.

The plan, which extends over 1.7 km will be carried out in two phases: the first phase runs until November 2011 and the second from April 2012 until July 2012. 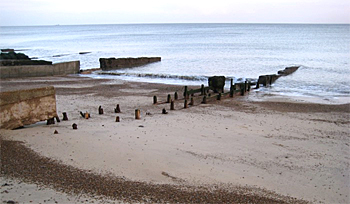 Minimum discomfort, maximum result
Mark Gardner, Operations Director at Volker Stevin: "This work forms a major challenge. As with all our coastal protection projects we are highly aware of the environment and we must apply the techniques to minimize impact and yet achieve the best possible result . "

Coastal protection is vital
Councillor Smith of the Suffolk Coastal District Council, says: "The coastal protection is vital for the future of Felixstowe and I look forward to the final result in the summer of 2012. The work will cause some short-term discomfort, but given the current state of the coastal defense, we must ensure that the project is realized as quickly as possible. "

Funded by Environmet Agency
The project is funded by the government through the Environment Agency that both the preservation of the beach over the long term and better accessibility of the coast supports.