As lead contractor VSBW Joint Venture, a consortium of VolkerStevin and Boskalis Westminster, has started work at the Port of Felixstowe on the latest expansion of the UK’s largest container port.

The initial dredging is scheduled to be ready this summer so the construction of a new steel-piled quay wall can begin. The project will involve a total dredging of 1 million cubic metres of material.

The work will increase the combined lengths of Berths 8&9 to 920 metres, giving the port even greater flexibility to berth the world's largest container ships. 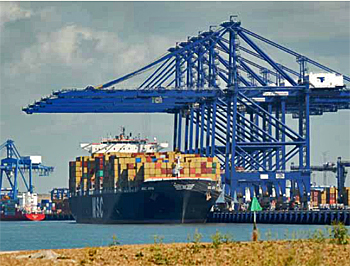 More large container ships
Clemence Cheng, Hutchison Ports (UK) Chief Executive Officer, said: "The scale of operations at the Port of Felixstowe already gives us the ability to berth more large container ships simultaneously than other ports in the UK. The new extension will increase the berthing permutations we can offer and continue to ensure that we turn our customers' vessels around in the quickest possible time."

Tubular pile design
Ian Cussons, VSBW Project Manager said: "We were delighted to secure the contract for the Berth 9 extension at Felixstowe and are ready to mobilise all the necessary resources in the very near future. The tubular pile design is very similar to the existing Berths 8&9 and will be built to allow the water alongside to be dredged to 18 metres depth."

Construction completed mid 2015
Piling of the quay wall for the new extension will start later in the summer with construction due to complete in mid 2015.

The new extension will be equipped with three new ship-to-shore gantry cranes, each with a 25-container wide outreach.

This news item was originally published on the website of Port of Felixstowe.