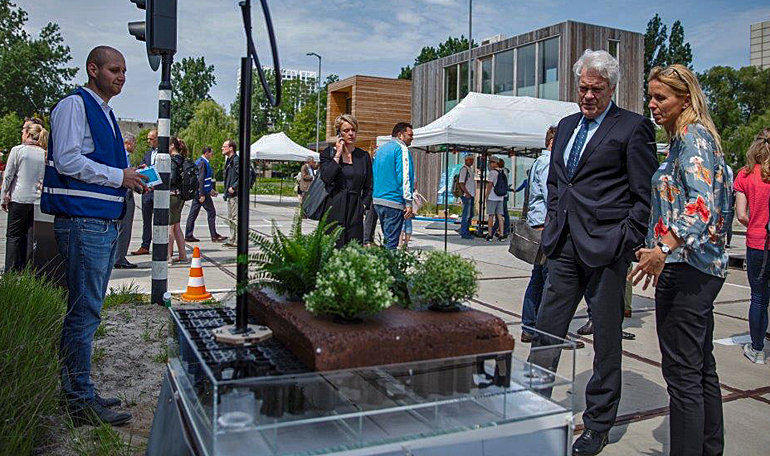 As a result of the expected increase of extreme rainfall events, several Dutch SME-companies developed innovative concepts to handle extreme volumes of storm water and store in underneath hardened urban surface.

The testing ground was officially opened by Delta Programme Commissioner Wim Kuijken and Water Board Council Chair Michiel van Haersma Buma on 16 May. 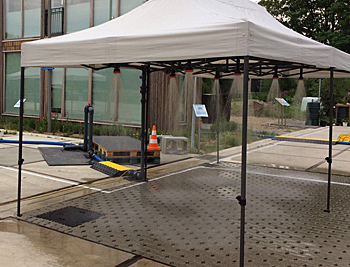 The mobile shower to test the drainage capacity of the pavement.

Local retention, anticipating on dry periods
VP Delta took the initative to gather 12 new concepts at one location on the campus of the Delft University. The facility got the appropriate name of Water Street.

A smart aspect of the new concepts is the local retention of the storm water runoff to anticipate on dry periods.

‘The Netherlands is more often faced with extreme showers’, said Marjan Kreijns (right on top photo), program director of VPdelta during the opening ceremony. ‘We cannot change the weather, but we can try to limit the nuisance and damage.’

Special Deltacommissioner Wim Kuijken (second right on top photo) called the testing ground a wonderful opportunity to take the next steps towards a nationwide climate proof and water resilient approach. Kuijken: ‘Use this testing ground to study and innovate together, and to bring about a transition. A transition to a new way of spatial planning. A way in which climate-proof action becomes standard practice.’ 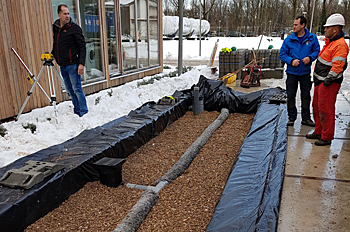 Construction of the Rainshell concept and its filter bed of shells and minerals to retain and simultaneously clean the runoff water.

Further development of concepts
The facility is the intermediate step between a laboratory setup and actual application in the public space.

It features several abilities for the SME’s to further develop their concept. For instance, there is a special shower that can be used to simulate extreme rainfall.

It is also possible for the SME’s to use researchers of the Civil engineering department of the Delft university.

At the same time the Water Street offers the possibility to demonstrate the concept to municipalities, water authorities, estate owners, or even foreign water delegations visiting The Netherlands. 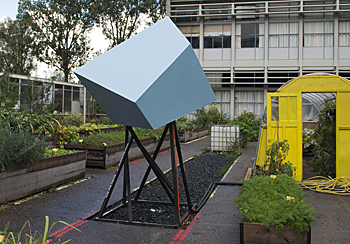 The Smart water barrel that can be programmed to slowly release its water before an extreme rain shower hits.

Three storm water concepts
The Water Street shows 12 different solutions to handle storm water in cities. These include:
● Urban Rainshell by Ecological Water Management
An underground storm water buffering and purification system with shells and minerals to purify the collected road run off water. The treated run off water allows local re use for instance as fire water, irrigation of sport fields and process water.
● Flowsand by Aquaflow
a special kind of sand for use in street pavements so the rain water drains more rapidly and prevents clogging. The sand has a capillary effect on the rain water so the street will be water free more quickly.
● Smart rain barrel by Studio Bas Sala
a rain barrel with a tap that can also be operated online and linked to the local weather forecast. In case a heavy rain shower is predicted, the barrel can slowly be emptied in advance, so the full retention capacity can be used during the actual rain fall.

The Water Street is an initiative of The Green Village, the regional Delfland Water Authority and VP delta.

This news item is based on the original release published on the website of VP Delta (in Dutch only).