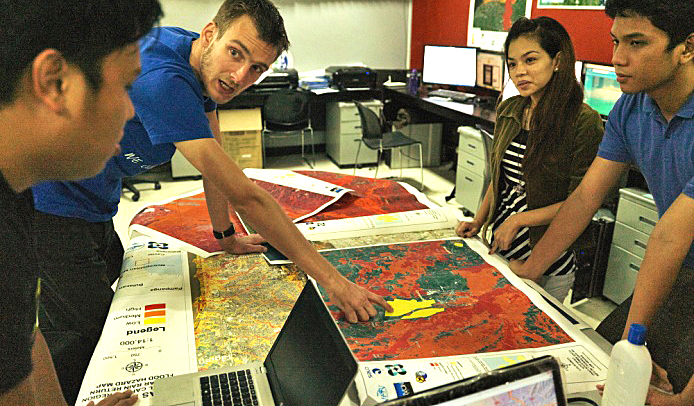 “Here in the Philippines disasters happen all the time, yet a lot of the emphasis is on how to respond to disasters instead of preparing for and actually preventing disasters”, explains Arnoud Keizer, whose professional experience in the Netherlands managing large infrastructural projects on waterways focuses almost entirely on disaster preparedness and prevention. 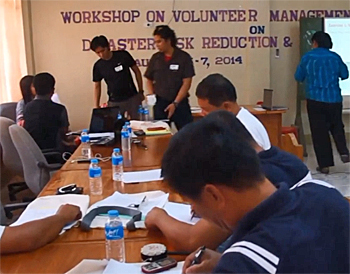 Ideal platform for disaster preparedness
In November 2013 Typhoon Haiyan tore a path of destruction through the Philippines affecting over 14 million people. The homes of five million people were damaged or destroyed, and over 6,000 people lost their lives.

VSO supports the Philippine government in their national efforts to use science and technology to prepare for and prevent future devastation.

The workshops enabled the community leaders to mobilise local volunteers to support the process of GPS mapping their communities, enabling volunteers to actively participate in disaster preparation measures.

OpenStreetMap is freely available online and its data is uploaded, stored and managed by volunteers, making it an ideal platform for disaster preparedness. 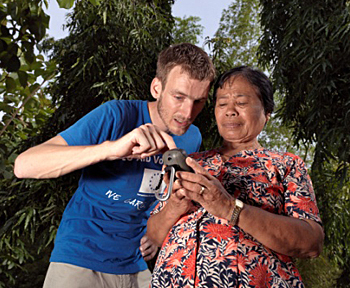 Haunted by devastation
One of the community leaders involved, was 74 year-old Anita Ayuban from the region of Bohol, Philippines, who has lived her entire life facing floods and typhoons, “One year we suffered a very strong typhoon. The roof was blown from our house so we went underground for safety...but it became full of water,” she recalls, adding, “I was very afraid, especially for my children.”

Anita and her family were eventually rescued by neighbours, but she has since remained haunted by the devastation a natural disaster can bring when a community is unprepared.

Driven by a desire to help her community prepare better for future typhoons, Anita is one of forty local community leaders in the town of Alicia in Bohol who participated in an OpenStreetMap workshop.

Lifesaving information
“Knowing in advance where important buildings at least risk of flooding are located; which places are most suitable for evacuation centres and how likely a place can be reached after an earthquake is lifesaving information”, explains Arnoud.

“The capital city of Bohol suffered a major earthquake in 2013, killing more than 200 people, and it was digitally mapped in the aftermath...but so much damage and destruction could have been avoided if it was mapped and the disaster planning had been done in advance”, says Arnoud.

When he’s not conducting workshops in disaster-prone areas, Arnoud spends his time in the capital city of Manila project managing components of the Filipino government Project DREAM (Disaster Risk and Exposure Assessment for Mitigation). It is a nationwide programme for creating sophisticated 3D hazard maps that can be used for identifying which areas are most likely to be affected by flooding.

About VSO and EU Aid Volunteers
VSO is an independent development charity currently providing volunteers in over 30 developing countries. With roots stretching back to the 1950s, VSO has placed over 40,000 people in various projects around the world and supported millions of people through the sharing of skills, energy and insight.

VSO Netherlands participates in a pilot project for the programme EU Aid Volunteers. Its partner, Dutch engineering firm Royal HaskoningDHV, supported the project and provided the placement of its employee Arnoud Keizer.

In 2015 the European Union intends to detach more experts for similar projects.

This news item was originally published on the website of VSO International, EU Aid Volunteers and Royal HaskoningDHV.