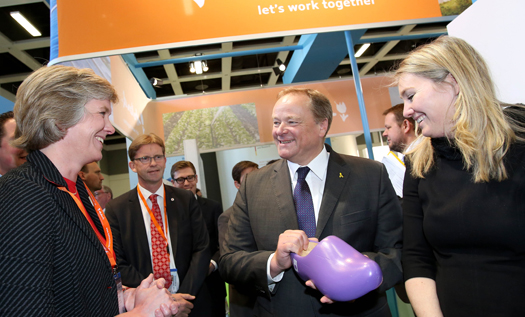 At the Dutch pavilion minister Niebel was presented a purple wooden clog by Aleid Diepeveen (left) of the Netherlands Water Partnership.

The joint visit by the German and Dutch ministers underlined the intention of both countries to intensify the cooperation for developing new water supply technologies. Both German and Dutch water sectors comprise many small high tech businesses operating in small niche markets.

On the occasion of Wasser Berlin both sectors met at a special symposium to discuss the possibilities of a closer cooperation for the development of new technologies. 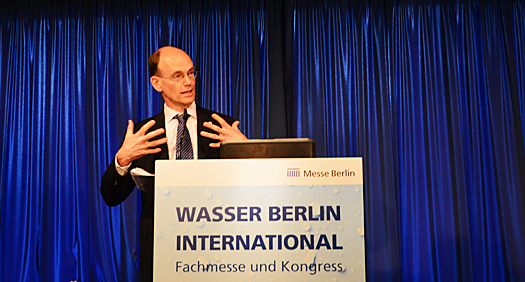 Prof. Cees Buisman of Wetsus research centre explained the close cooperation in the Netherlands between the water authorities, universities and water technology companies to develop new technologies in a demand-driven way. Buisman gave as example the recovery of phosphorus from urine.

New technologies use magnesium but applied at a large scale this would demand large volumes of magnesium. Wetsus is studying the possibility to use calcium instead, being a much better available substance. 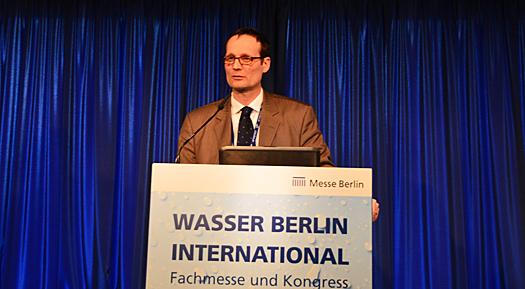 Dr. Friederich Hetzel of the German Association for water, waste water and waste (DWA) acknowledged that both sectors could benefit when working closer together. In his speech he emphasized that the water standards are very strict both in Germany and the Netherlands. In order to maintain the high level of health protection also in the future, the water sector needs new cost-effective technologies.

Close German-Dutch cooperation could broaden the possibilities for totally new ways to deal with future problems as neophytes, slowing down the water cycle in urban areas and pharmaceutical residues, according to Hetzel.

German beer festival
Close international links can be of great importance, proved the story of Andreas Giesen of Royal HaskoningDHV. Giesen talked about the joint development of the Nereda waste water treatment technology by water authorities, universities and his own company. He told the anecdote that the German professor Peter Wilderer and the Dutch professor Mark van Loosdrecht met at a German beer festival and concluded that it should be possible to develop a sludge granule, similar to anaerobe water treatment, but than for aerobe treatment.

According to Giesen this gave birth to the ground-breaking Nereda technology that is now operational at the first wwtp-plants.