Water as Leverage: Energetic first round design workshops in Chennai, Khulna and Semarang 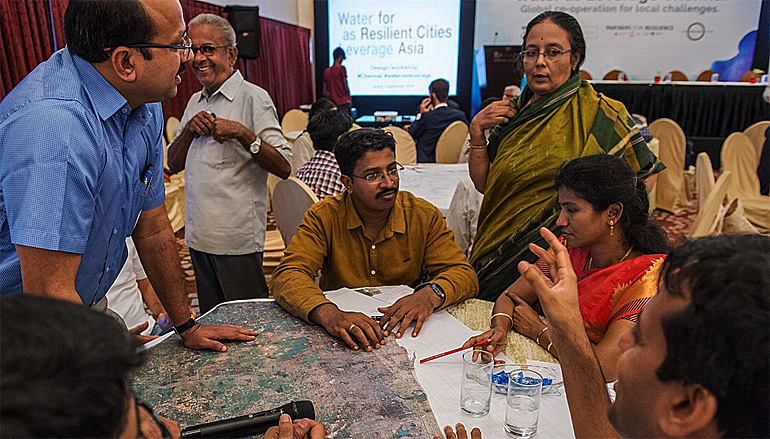 ‘We need to convert the energy in this room to actual implementable projects’, said Shantha Sheela Nair in Chennai, India, at one the three design workshops organised by the programme Water as Leverage for resilient cities Asia.

Sheela Nair, former servant at the Chennai municipality, sharply summarised the high energy level at the Chennai workshop, that was also present at the other two workshops.

This first round of design workshops took place Semarang, Indonesia (3-4 September), Chennai, India (6-7 September, on top photo) and in Khulna, Bangladesh (10-11 October). The second follow up round of workshops is scheduled for late November and early December. 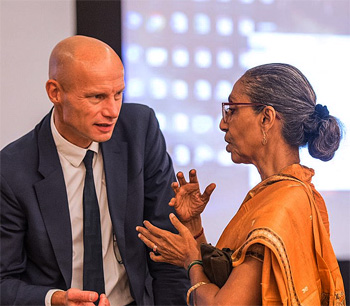 Multidisciplinary teams
The Water as Leverage initiative focusses on solving the water issues in the three Asian cities by the formation of multidisciplinary urban design teams.

Earlier this year experts, firms and organisations had the opportunity to propose unconventional urban designs to trigger the local communities to solve their water problems.

Per city, two multidisciplinary teams have been tasked to meet the local stakeholders and hold a workshop to better understand the local needs and develop a better insight on vulnerabilities, threats and interdependencies.

Catalysing change
The first round of workshops - with a mix of working sessions, presentations, knowledge sharing and networking - unraveled many opportunities for intervention.

In energising round table sessions, the teams discussed their visions, using maps to visualise their specific approach to catalyse change.

The Water as Leverage initiative seeks to fully understand the complexity of urban water challenges and to explore solutions that can be implemented as part of the wider urban development, such as new road constructions, district upgrading projects, river restorations, waterfront developments and creation of green-blue areas. 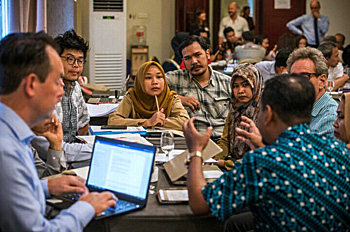 Serious talks on the water challenges in Semarang, Indonesia, such as the urgent need to stop the soil subsidence and to counter the inland flash floods.

Local water challenges
In Semarang (Indonesia), the two design teams, consisting of local and international experts, worked on the urban and water related challenges through community presentations, discussions with local government and exchanges between team members and experts.

In Chennai (India) that workshop was characterised by a relevant mix of in-depth team discussions with high-level government officials and personal stories told by community representatives about the challenges they face on a daily basis.

In Khulna (Bangladesh), the two teams already had been working on their research for more than a month, so the focus of the workshop was to take their first findings a step further in small groups with all relevant stakeholders. And similar to the other workshops, it was all about working together and informing the different stakeholders on the innovative and transformative character of the Water as Leverage programme. 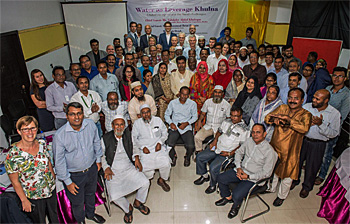 All participants of the first Water as Leverage design workshop in Khulna, Bangladesh.

Second round
The six teams are now in close contact with the local stakeholders and deepen their research and collecting of sources to further shape their conceptual designs.

The results will be presented, discussed, verified and clarified during the next local design workshops in the three cities (Chennai 26 and 27 November; Semarang 29 and 30 November; Khulna 3 and 4 December).

The teams are expected to have their final proposals ready by April 2019.

This news item was originally published on the website of the Netherlands Enterprise Agency (RvO.nl).
(photos: Twitter)

Special Dutch water envoy Henk Ovink explains in this video the initiative Water as leverage during the workshop in Chennai, India.