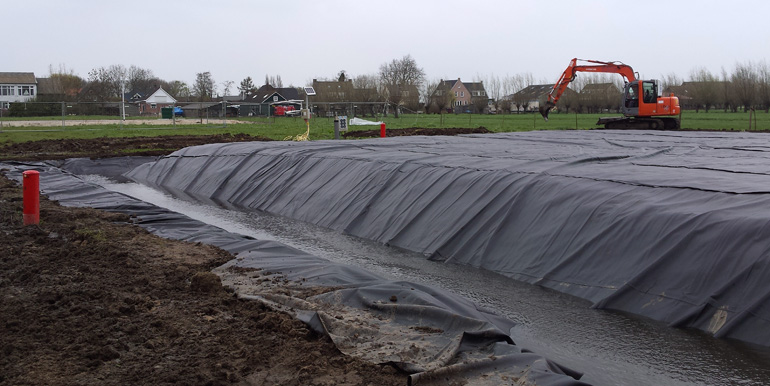 Dutch regional water authority Rivierenland started a field test with vacuum consolidation as a mean to reinforce its river levees.

For three months a special designed vacuum pump will create a low suction pressure in the subsurface of a test site of 15 by 15 m that has been covered with a geotextile. As a result the subsurface will become more compact and the shear strength will improve.

This subsurface consolidation technology can potentially be used to upgrade the stability of levees as an alternative to widening the berm.

The field test is part of a national programme to explore and improve macro stability of levees (POV) and the national River and sea defense programme (HWBP). 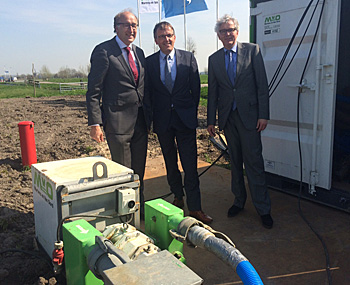 Erik Kraaij (left), manager of the national River and sea defense programme, officially started the field test by switching on the pump.

Better faster and cheaper
Vacuum consolidation is an existing technology for improving levee stability. Now, for the first time, its performance will be thoroughly analysed, including its lasting effects.

An evaluation of the field test is expected to show whether the technology is better, faster and cheaper than current technologies to upgrade levee stability.

The technology is seen as highly potential for levees in nature conservation areas or where houses adjoin the levee. In these cases there is limited space available.

By using vacuum consolidation it is possible to strengthen the soil and upgrade a levee without having to widen the berm.

Behaviour of subsurface
A soil survey for this test site (on top photo) took place and the baseline situation was assessed using laboratory tests. After the test, a number of control measurements and borings will take place at set intervals to monitor the behaviour of the subsurface. 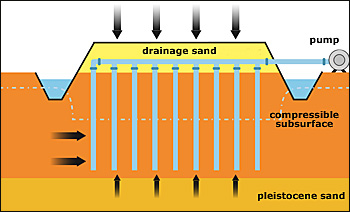 Scheme of vacuum consolidation to strengthen the subsurface.by pumping out air. The low suction pressure makes the soil more compact..

Factor two stronger
Deltares project leader Huub de Bruin is very optimistic on the outcome of the field test: "Vacuum consolidation can improve the undrained shear strength by a factor of between 1.5 and 2. In addition to all the benefits associated with this approach, such as reducing the effect of the local conditions, the possibility of raising the dike faster and the reduction of residual deformation”.

De Bruin: "This technology would seem to be a very good way of keeping stability berms smaller so they can fit into the available space near the levee. That may help to upgrade levees faster and more economically.”

Deltares will also draw up a method to be able to determine the new shear strength of a levee after treatment with vacuum consolidation.

The national River and sea defense programme (HBWP) is in the process of upgrading 744 km of levee in the next coming years. For 287 km of levee the macro stability needs to be improved.

A special project group POVM is now looking for innovative solutions and several techniques are currently under development or being tested. Vacuum consolidation being one of them.

This news item is based on the original news items on the websites of Deltares and Martens & Van Oord (in Dutch only).