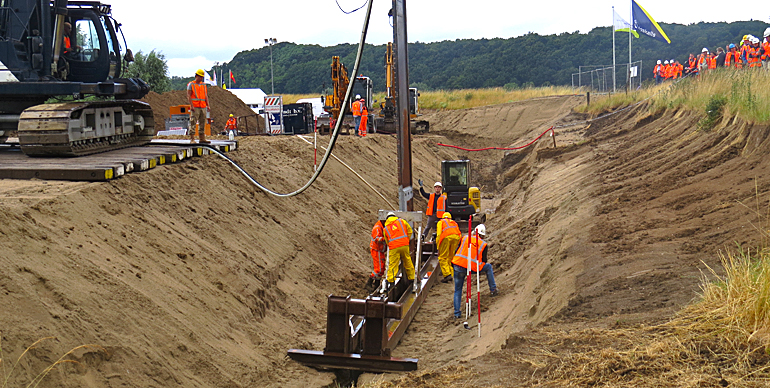 Dutch regional water authority Rivierenland contracted two companies, Van den Herik and Boskalis/Cofra, for the construction of a vertical geotextile screen in the berm of the river levee along the Nederrijn, near Opheusden, the Netherlands.

Requested by the water authority, the two companies developed their own technology to construct such a screen that is specially designed to prevent piping, a phenomenon that occurs in case of abnormally high water levels and water seeps under the levee and starts carrying sand.

Both companies got a levee section of 500 m to proof they can place a vertical geotextile screen that stops the sand transport but allows the seepage water to flow through.

On 8 July, Boskalis/Cofra was world's first to launch its new anti-piping technology based on a geotextile screen (see top photo). Van den Herik will follow with a different geotextile-based technology in two months' time. 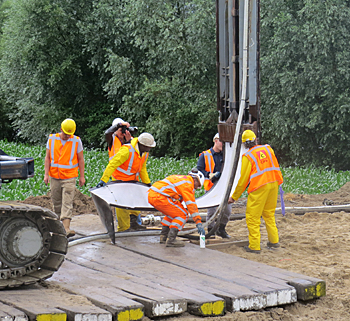 Anti-piping technology by Boskalis/Cofra uses modular geotextile screens that can be locked together in the underground.

Growing concern over piping
Ten years ago piping undermined the concrete I-walls along the drainage channels in New Orleans when hurricane Katrina hit the city hard. It put the issue of piping high on the agenda of Dutch water authorities and levee inspections learned that many sections were very vulnerable to this phenomenon.

Water board Rivierenland has many clay levees along the large rivers, such as the Rhine and Meuse, that rest on sand layers, and thus its levees are very vulnerable to piping.

The most classical way to prevent piping is by widening the toe of the levee or by constructing a very deep pile sheet wall.

The water board studied cheaper and less space consuming alternatives and started experimenting with underground screens of geotextile that stop only the sand transportation, but not the flow of the seepage. 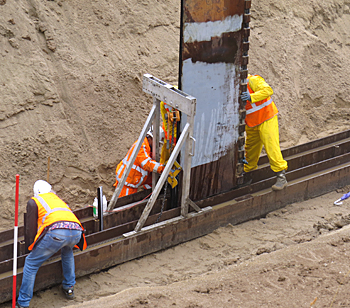 A trencher digs a trench and can lower the geotextile modules.

Invitation to civil engineering sector
Convinced of its potential the water board invited Dutch civil engineering companies to develop a geotextile technology for anti-piping. As a result two companies have now been invited to place their screens over a length of 500 meters. Boskalis/Cofra is now world's first to place such a screen. 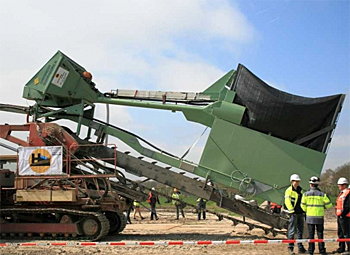 Van den Herik developed a mobile machine that can put the screen in place directly from the roll.

This technology has the advantage that the screen can be placed with precision. This comes in handy in densely populated areas where the screen has to be placed next to houses and roads.

Geotextile from the roll
Van den Herik developed a technology with a special designed mobile construction that houses both the trencher and the large geotextile rolls.

This machine can put the screen in place continuously, making it much faster.

Another advantage of this technology that it uses geotextile on a roll that can be supplied by any producer.