Regional water board Vallei-Veluwe officially opened its modernized waste water treatment plant Apeldoorn with a NuReSys struvite reactor to produce fertilizer from phosphate in the sludge, and a TurboTec thermal pressure hydrolysis installation to boost the production of biogas.

The renewed wwtp Apeldoorn is part of a national programme by the Dutch water boards to utilise more energy and raw materials from municipal waste water. At the moment some 15 Dutch wwtp's have been or are being converted to 'energy factories', producing more biogas and recover materials such as fertilizer, bioplastics, cellulose.

The modernization project was realised by a consortium formed by GMB and Imtech.

The new struvite reactor recovers 900 ton struvite annually from phosphate that is present in the indigested waste water sludge.

The water board selected the NuReSys-technology from the Belgian-based company with the same name. 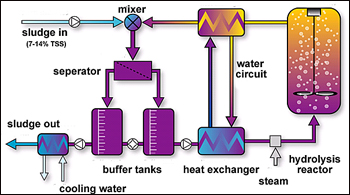 Thermal pressure hydrolysis with the TurboTec process increases the biogas production at wwtp Apeldoorn with 30 percent.

More production of biogas
The other new feature of wwtp Apeldoorn is the TurboTec thermal pressure hydrolysis (THP) installation. This is a kind of 'pressure cooker' that cracks the molecules of the sludge under high pressure at a temperature of 140 degrees. This allows more water in which the phosphate is free, and fermented sludge better.

It is the second full scale TurboTec installation that has been build at a municipal waste water treatment plant. The technology has been developed by Dutch-based company Sustec, an affiliate of GMB.

The TurboTec installation makes it easier to dewater the sludge and the digestion of the sludge produces 30 percent more biogas.

An additional advantage of the THP-process is that fewer problems arise with struvite formation in the pipe system and by heating of dew.

Water board Vallei-Veluwe supplies its energy surplus to the national electricity grid and to a central heating system in a nearby residential area in Apeldoorn.

In 2016, the water board will open a similar renwed wwtp-plant in Amersfoort where another 900 ton of fertilizer is to be produced.