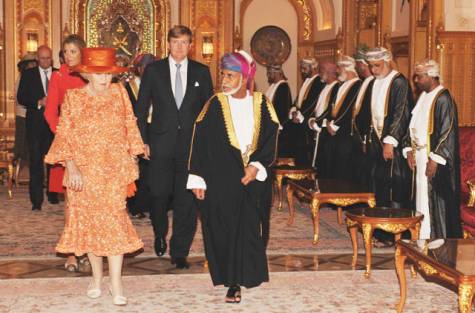 During the visit of the Dutch queen to Oman from January 10-12, the presentation of water-related projects in Oman were an eminent part of the official programme.

More export by small companies
Oman and the Netherlands have agreed to specially stimulate the export by small and medium-sized companies (SMBs). During the visit a memorandum of understanding was signed. To underline the new policy several Dutch companies accompanied the queen to give pitch talks to an Omani audience.

More crop per drop
Dacom presented their Agri Yield Management concept for improving the agricultural production throughout the growing season. One of the advantages of the concept is a considerable reduction of the water use.

Dacom developed special sensors for GPS-based measuring of soil moisture and the weather. The data is collected by remote control, integrated in satellite-measurements and made available through internet. Dacom has these sensors also in place in Oman and the local optimisation op the water use is controlled from its headquarters in the Netherlands.

Dutch dialogues approach
Another company that made a presentation was the CMTS-VSI Group that is involved in a 160 million euro tender for the development of a plant for the treatment of hazardous waste, a key part of which will involve water treatment.

The presented ‘Dutch Dialogue approach’ of the Deltares research institute for water, soil and subsurface is a comprehensive approach to address water issues in Oman.

The queen attended the opening of a new building for the International Maritime College Oman (IMCO). This college is owned by a joint venture of the Omani government and the Dutch maritime educational institute STC group from Rotterdam. 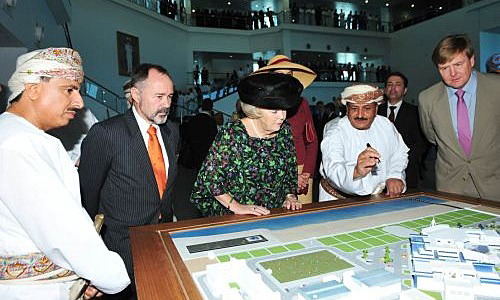 Growing trees without irrigation
In the port of Sohar the queen also visited the Groasis planting place to see the first 40 Waterboxx's that were installed last year. The Waterboxx is a new Dutch technology for growing trees in semi-arid areas. The box, 50 cm in diameter and 25 cm high, enables a tree to grow without irrigation. 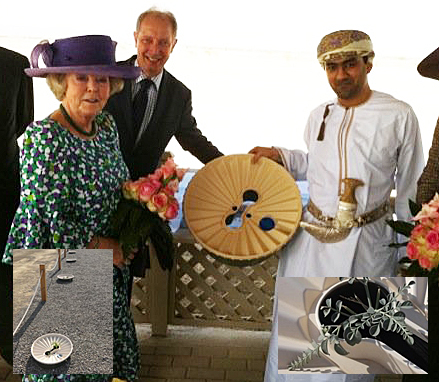 Enough rain in Oman
The Waterboxx traps rain water in such a way the water cannot evaporate and remains in the box. The first boxes in the port of Sohar are to prove that the occasional rain in Oman is enough to fill the boxes with water for a year. Following the first phase of the project, some 400 boxes will be installed in the near future.

Education programme for water management
An important goal of the visit to Oman was to improve the relation between the two countries in the field of education. A key element in this relation is the Sultan Qaboos Chair for Quantitative Water Management in Semi-Arid Regions at the University of Utrecht in the Netherlands.

This special chair was established in 2007 on the occasion of the 35-year reign of His Majesty Sultan Qaboos of Oman. 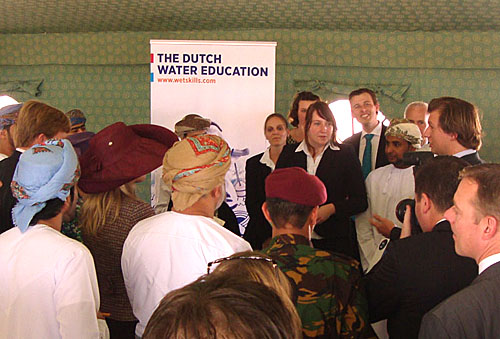 Joint workshops for Dutch and Omani students
As part of the Wetskills international educational water management programme, students of the University of Utrecht and the Saxion university of applied science had traveled to Oman to participate in workshops with Omani students.

In joint projects they addressed solutions for supplying water to diverse sites such as densely-populated urban areas, deserts and green regions.

Improved harvesting of monsoon rain water
The best project was awarded with the 5th Wetskill price. The winning team addressed the over exploitation of groundwater around Salalah, in the south of Oman.

Presently 20 percent more groundwater is pumped up than is received by the natural replenishment. This lowers the groundwater level and leads to intrusion of salt groundwater from the sea.

The students suggested to improve the preservation of the monsoon rain water by reconstructing of dams, by placing rain collectors on roofs of buildings and by planting more trees.

In the presence of the Dutch queen the 5th Wetskills price was handed out by professor Ruud Schotting, who holds the Sultan Qaboos Chair for Water Management.