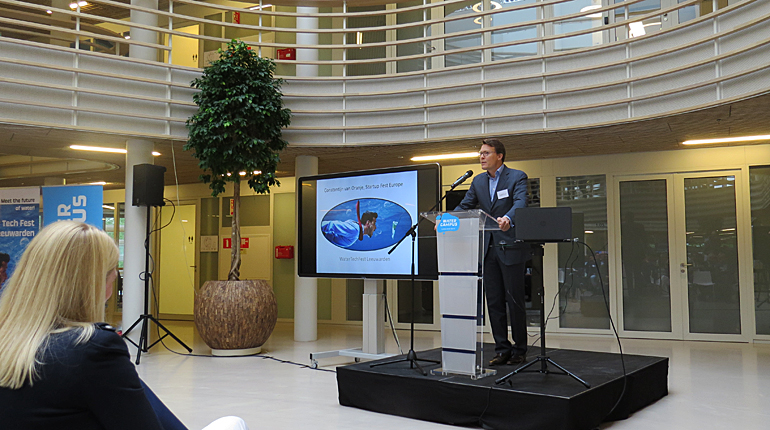 “It takes a framework to connect business and the solutions to the hard water problems the world is facing”, said His Royal Highness Prince Constantijn of the Netherlands at the opening of the Water Tech Fest event at the WaterCampus Leeuwarden on 25 May.

The Water Tech Fest brought together startups, investors and business leaders in the water technology sector. The event was part of the full week programme of Startup Fest Europe with similar match making meetings for different sectors.

Startup Fest Europe is part of the official programme of the Dutch presidency of the European Union.

Prince Constantijn was recently appointed as special Dutch envoy for startups and in this new role he addressed the water technology sector at the WaterCampus. 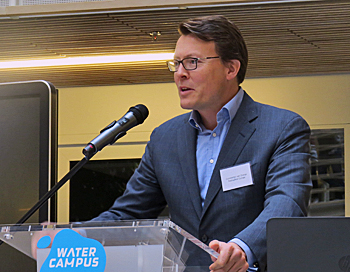 Dutch special envoy for startups, Prince Constantijn, called upon the innovative powers of the water industry to tackle the massive global water issues.

Scaling of disruptive water technologies
The event addressed the gap between solving the hard and wicked water problems and the lack of short term revenues from water technology that shakes up the sector.

Prince Constantijn mentioned the massive water challenges the world is facing and the need for disruptive water technology. “The good news is that these challenges also provide massive opportunities. Collaboration is needed to draw upon the innovative powers of business", he said. 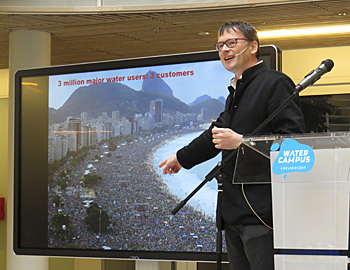 Christopher Gasson of Global Water Intelligence showed the beach of Copacabana filled with 3 million people. Imagine, this is where you have to find your launching customer.

He referred to the large number of organisations in the world that use more than 50,000 m3 water per year. “Most of them are municipal utilities that are not really interested in new technologies”, he said.

According to Gasson the industrial water users also lack real interest. “Water is horribly under prized, so water problems can be left till tomorrow.”

Innovation-minded utilities
Gasson is leading an initiative – the Global Water Leadership network - to gather water utilities and agencies to address the global water issues and accelerate the change in the water industry. He expects these water utilities to have an above average interest in using new water technologies. “This way the global market can be reduced from 3 million to a few hundred. By focusing on this more innovative minded utilities it becomes much easier to find launching customers.” 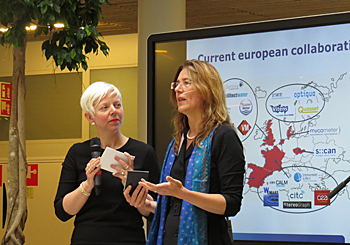 Growing complexity of water supply
CEO Lieve Declercq of the Dutch water supply company Vitens underlined the fear for disruptive water technologies. Water quality and reliable 24/7 services have top priority, she said. “Our customers will not forgive us when we cannot supply clean water because we have been experimenting.”

Yet Declercq believes water utilities have an obligation to open up for innovation. “We need new technologies to meet the growing complexity of water treatment and distribution."

As an example she mentioned the need for an intelligent underground distribution scheme with real time monitoring of leakage and water quality and an efficient energy use.

"We created the ability for sensor suppliers to use their new technologies in our distribution network, here in the city of Leeuwarden. We call it the Vitens innovation playground. For years we have been working with Optiqua that used our playground to develop their lab-on-a-chip sensor for real time monitoring of the water quality.”

Believer versus account
Declercq recalled the moment she had to decide to become the launching customer for Optiqua and formally purchase 80 of their EventLab sensors.

“I had to explain to my financial officer why this investment was necessary. It is about believing in a concept that leads the water supply to a next stage", Declercq explained. She envisioned a future with data algorithms controlling all process operations in her company.

According to Declercq there is no time to sit back and avoid all risks. She concluded by saying it is a strategical choice to implement new technologies and dare to bridge the gap between believe and proof.

Read also on this website
● Water Tech Fest - Be part of the biggest startup festival on the planet!, 3 May 2016