Wavin, the Dutch-based subsidiary of Mexican plastic pipe supplier Mexichem, won a tender for a Q-Bic Plus infiltration system at the new football stadium for Oslo's home team, Valerenga.

This storage system consists of 2352 units that will be built in three floors. The system will allow for all the rainwater from the rooftop areas of the stadium – from the football field and from the park area – to be collected and brought down through the plastic piping system. 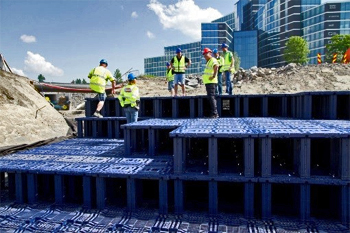 The system is based on a modular concept that only uses side panels where they are really needed. This means that side plates are only placed on the outside surfaces of the tank.

Every part of the system can be clicked together, without the use of connector pins or tools, which greatly increases installation speed.

According to project manager Arne Gustav Hageland at Marthinsen & Duvholt, "We quickly realized that Q-Bic Plus would be easy for our construction crew to handle." And, indeed, in just one hour, 336 units were assembled – by 5 men. That's 14 percent of the whole installation.

"At this pace," said Wavin Norway's product manager civils & infrastructure, Vidar Handal, "the estimated total time to install the system on this huge facility will be only 33 hours. And time is money." 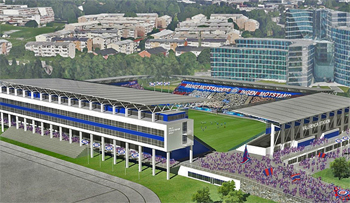 Impression of Oslo's new football stadium that is planned to be ready by September 2017.

Infiltration to groundwater
The Q-Bic Plus maintains the groundwater level in the area of the football stadium. By laying down a grade 3 fiber cloth at the bottom, it ensures that a portion of the water is filtered and pulled to the soil.

By contrast, concrete pipes use surface water led into the public sewer system. No water ports to the ground, which can cause serious damage to buildings nearby.

“In such a densely populated area like this, the Q-Bic Plus is the right choice. I think it's actually strange that concrete pipes are used at all,”, added Arne Gustav Hageland.

This news item was originally published on the website of Wavin.

Presentation of Wavin's Q-Bic Plus, a modular rainwater infiltration and attenuation system.