Wayss & Freytag Ingenieurbau, the German tunnel specialists of Royal BAM Group, have been awarded a contract in Germany to the value of 420 million euros for the construction of a 35 kilometer-long underground waste water pipeline. The project is part of a large-scale modernization of the waste water system of the Emschergenossenschaft public water board.

The project involves the construction of a pipeline between Dortmund and Bottrop, which is intended to carry waste water to the waste water treatment plant Emschermündung near Bottrop.

The underground pipeline, which will be built in the form of a tunnel, will vary in diameter from 1.6 to 2.8 meter and will run parallel to the River Emscher.

The work will start next spring and is expected to take five years.

Excavation of 100 shafts
To build the Emscher sewage canal and also for its later operation, it is necessary to build shafts. The sewage canal will have about 100 shafts, of which 70 will be located along the main axis of the pipeline, whereas 30 will be located collaterally. They constitute the point of transmission for the pipes from the tributaries of the Emscher River.

The building work is planned in such a way that a circular building pit will first be excavated with overlapping uncased concrete piles or subterranean curtains. The pipe drive will begin in each case in these building pits

Three pits for the pumps
For three pits work already began in 2009. These pits are to house the pumping stations for the sewage canal. . These are circular pits being sunk in the protection of a staggered wall of uncased concrete piles overlapping each other. The diameter of the building pits is 50 m, the depth will also be about 50 m. The diameter of the drill-foundation piles will be 1.50 and 1.80 m.

Restoration of Emscher river
The canal is part of an overhaul restoration project for the 80 km long Emscher river in the hearth of the most densely populated area of Germany. With an investment volume of 4.5 billion euros and a project period of several decades, it is one of Europe’s biggest infrastructure projects. In June 2001 the first phase of this project was finalized with the construction of four large waste water treatment plants.

The second phase is the realization of 400 km sewage system, including the canal, to separate the waste water from the storm water. The finale phase will be the reshape of the river itself. The Emscher river is now a small straight waterway. In 2020 is supposed to meander through at 800 m wide ecological zone, as broadly sweeping course typical of lowland rivers with its own dynamic 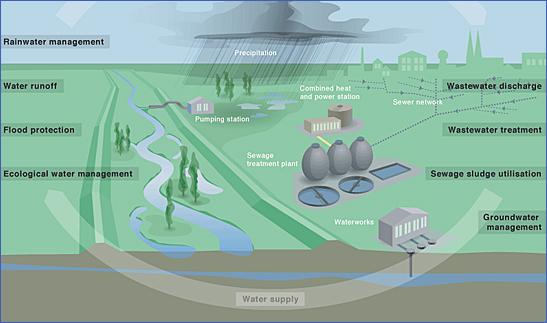 This news item is based on a press release originally published on the website of Royal BAM Group.