WCDRR 2015: Agreement on seven targets to reduce victims and damage caused by disasters

It took the representatives from 197 UN member states a 24 hours final marathon debate to reach an agreement on the Sendai Framework for Disaster Risk Reduction 2015-2030 – the new international framework for disaster risk reduction.

The UN member states agreed on the formulation of seven different targets to reduce the number of victims and damage caused by natural disasters. The member states, however, did not come to an agreement on quantifying a reduction percentage for each of these targets.

The conference was the first in a series of mile-stone events on far-reaching global policies for the next 15 years. This resulted in an over-politicized agenda on the specific issues of disaster risk reduction. 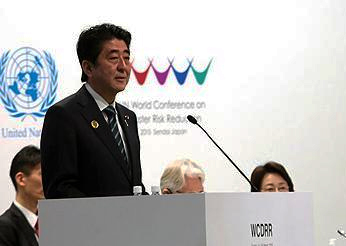 Japanese prime minister , Shinzo Abe, mentioned that his country constantly revises its flood management plans. 'Building back better' has paid off, he said. Sixty years ago thousands of lives were lost by large-scale flooding; now it is rare for a flood to take more than 100 lives.

Building back better
The new frame work for action gives four priorities for the next 15 years, including a more effective preparedness and embedding the 'build back better' principle.

Build Back Better, is the internationally known concept drawing on lessons learned from a past disaster and apply this knowledge in the recovery, rehabilitation and reconstruction phase of that disaster.

The Sendai agreement evokes a people-centred multi-hazard approach for reconstruction, with special attention for facilities for vulnerable groups such as disabled people.

The 'Build Back Better' principle was so often mentioned during the 600 meetings that many considered it as the unofficial slogan for the conference.

Dutch delegation satisfied
Although the Dutch delegation was strongly in favour to quantify the targets, it was still satisfied with the outcome of the second Hyogo Framework for action (HFA2). The document emphasizes the importance of investing in prevention and encourages the involvement of private partners, the financial sector, civil society and local actors such as cities. 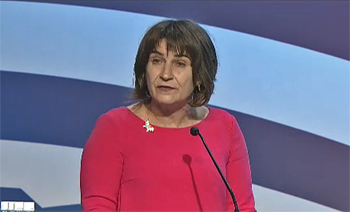 Statement by minister Ploumen
In her plenary statement on behalf of the Dutch government, minister Lilianne Ploumen of Foreign trade and development cooperation, mentioned that the world has more refugees now than ever before since World War Two.

She said the Dutch government decided to donate a 570 million euros for relief efforts. "But what is really needed is a long term perspective and a focus on disaster prevention", she said.

Ploumen noticed that the focus is already changing from disaster response to disaster preparedness. "It is recognized that investment in disaster risk reduction pays off. It is not a cost but an opportunity".

DRR-management in river deltas
The minister mentioned some important experiences with water management in the Netherlands. "Tools such as building with nature, spatial planning and land-water management are essential to address the underlying risk factors for disasters. Together with Japan and Colombia we will explore here in Sendai, at a side event, an international coalition on integrated delta management and resilience."

The Dutch delegation is convinced that the new HFA2 framework will give a big boost to disaster prevention. Therefore it will stimulate Dutch government, institutes and companies to continue their water-related activities, such as the deployment of more DRR- and DSS-assessment teams, the formation of a global Delta coalition, the work of the recently appointed international water envoy, and the further development of the Flood risk analyzer in corporation with the World Resource Institute. 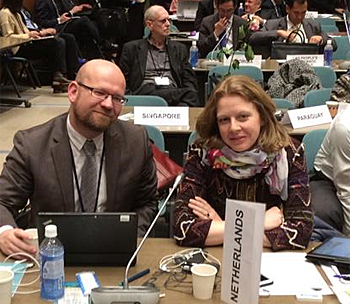 Maurice van Beers (left) and Nathalie Kröner (right) of the Dutch delegation, keeping up spirits during the 24 hours marathon session on the final Sendai agreement.

Seven DRR-targets
The Sendai Framework sets seven targets to assess progress at the global level, which aim to:
• substantially reduce global disaster mortality by 2030, and lower average per 100,000 global mortality between 2020-2030 compared to 2005-2015;
• substantially reduce the number of affected people globally by 2030, and lower the average global figure per 100,000 between 2020-2030 compared to 2005-2015;
• reduce direct disaster economic loss in relation to global GDP by 2030;
• substantially reduce disaster damage to critical infrastructure and disruption of basic services, among them health and educational facilities, including through developing their resilience by 2030;
• substantially increase the number of countries with national and local DRR strategies by 2020;
• substantially enhance international cooperation to developing countries through adequate and sustainable support to complement their national actions for implementation of this framework by 2030; and
• substantially increase the availability of and access to multi-hazard early warning systems and disaster risk information and assessments to the people by 2030.

These targets are to be incorporated in the Sustainable Development Goals that are to be adopted by the United Nations in New York in September.

As special working group has been assigned to develop the indicators that are necessary to monitor the progress on meeting these targets.

Negotiating the bill
A breakthrough on the world's post-2015 sustainability and climate agenda is possible if an agreement is reached on a special financial summit in Addis Ababa in July.

Japanese prime minister, Shinzō Abe, embarked on the global financial negotiations and announced in Sendai 4 billion US dollar for the implementation of the Sendai Cooperation Initiative for DRR over the next four years, focusing on institution-building, material assistance and the promotion of regional cooperation.

Full plenary statement by Dutch minister Lilianne Ploumen at the WCDRR in Sendai, Japan on 17 March.