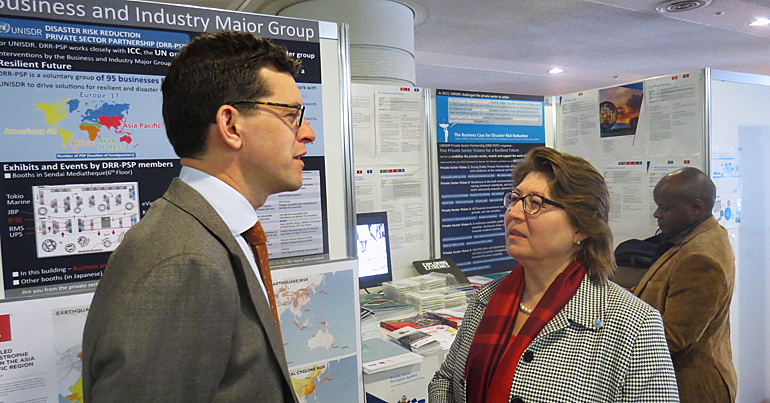 “The Serbian water authorities did a quick fix of their levees after the floods in May 2014. However they lack a good analyses of the status of their flood defences for a structural improvement. Especially for the smaller rivers where the flash floods took place”, tells Irena Vojácková-Sollorano.

Vojácková-Sollorano is resident representative for the UN Development Programme in Serbia and was one of the many speakers on the UN World conference on disaster risk reduction in Sendai, Japan.

Highly appreciated
During the conference she met Mathijs van Ledden of the Dutch consultancy firm Royal HaskoningDHV with whom she works closely together on the issue of flood protection in Serbia.

Flood expert Van Ledden was recently in Serbia as part of the Dutch risk reduction team to advice the Serbian government on a long term plan for river basin management. According to Vojácková-Sollorano the Dutch expertise is highly appreciated. 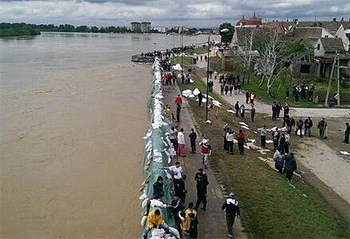 Critical situation in Sremska Mitrovica along the Sava river in May 2014.

Quick response
Just after the floods Vojácková-Sollorano was involved in the request for a formal UN assessment team, including a flood expert. The team accessed the critical situation, especially around the town of Obrenovac where two large rivers join and the water level remained critically high for a long time.

“He did a good job”, praises Vojácková-Sollorano. “He provided us with a good analysis of the situation. Now we are in the next stage. Together with the Serbian authorities we are working towards a more structural flood protection plan”.

Five year plan
As the emergency situation has stabilised, the UNDP steps back and the Serbian authorities have to take over full responsibility again. “We are working with them on a five year plan for risk reduction. This plan should give a clear idea of where new flood barriers are needed. Mathijs is assisting in a river basin plan for the Kolubara river. We are very glad to have the private sector involved. They are very practical”, she adds. 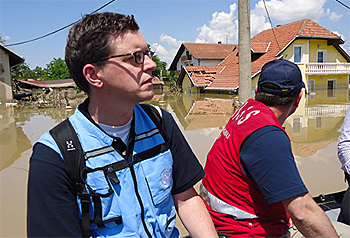 Mathijs van Ledden on location in Serbia a few days after the floods.

EU standard on flood risk management
Vojácková-Sollorano realizes the Serbian government cannot have a solid disaster risk reduction plan overnight. “They have a long way to go. For a long time the country had other more pressing issues to handle. They neglected the flood risks. Being pressed by the European Union they want to meet the standards of Water Framework Directive and this implies they have to make flood risk assessments and take risk reduction measure. This especially accounts for the small rivers.”

For each request a dedicated team of experts is formed. These DRR-teams operate in addition to these ongoing cooperation projects, especially addressing urgent water issues. Formal requests for the DRR-team are handled through the local Dutch embassies.

DRR-team's first call out was to Mexico in March 2014, followed by call outs to Senegal, China, Serbia, Pakistan and Albania.