On 14 March the third UN World Conference on Disaster Risk Reduction will start in Sendai, Japan. Several thousand participants are expected to attend the event that is to adopt a post-2015 framework for disaster risk reduction.

2011 Tōhoku earthquake and tsunami
Today, on 11 March, it is four years ago that an 8.9 earth quake occured 120 km of the coast of Sendai, causing a tsunami with waves up to 40.5 m high. In the Sendai area, the waves travelled up to 10 km inland (top photo).

The official death toll of this mega disaster is 15,854 deaths (with 3,203 missing). The economic cost has been estimated by the World Bank to be 235 billion US dollar, making it the costliest natural disaster in world history.

In connection with the report’s findings, the Secretary-General said: "We are playing with fire. There is a very real possibility that disaster risk, fuelled by climate change, will reach a tipping point beyond which the effort and resources necessary to reduce it will exceed the capacity of future generations."

New global policy on risk reduction
This year the first Hyogo Framework for action 2005-2015 will expire and in the past months negotiations took place for a second - more ambitious - post-2015 framework.

The negotiations have been successful concerning the development of guidelines and the implementation of monitoring and good practices.

The more difficult part is the formulation of risk reduction targets that will be incorporated in the Sustainable Development Goals (SDGs) to be adopted by the United Nations in September.

During the WCDDR-conference ministers from all UN-nations, including Lilianne Ploumen from the Netherlands, will finalize the negotiations on the new global policy for disaster risk reduction and ratify the new HFA2-framework.

Dutch contributions
A large Dutch delegation will contribute to the conference with special organised side events, with many presentations and a national exhibition booth. 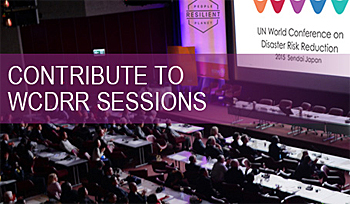 The contribution includes:
● Flood prevention
Several Dutch flood experts will participate in sessions on the prevention of floods. A Dutch side event will specifically focus on the cooperation between countries with large river deltas.
● Ecosystem-based risk reduction
Dutch-based organisation Wetlands International will participate in many sessions on ecosystem-based disaster risk reduction, such a mangrove forests or artificial reefs.
● Resilient cities by design
Two Dutch side events will take place on designing more resilient cities and the development of new tools for cities to be able to adapt more quickly to climate change and socio-economic developments.
● Partners for resilience
Dutch aid organisations that participate in the Partners for resilience will share their experiences with integrated approach, supporting communities to withstand shocks from natural hazards.
● Flood risk analyzer
Several Dutch delegates will be present at the official launch of the Flood Risk Analyzer by the World Resources Institute, a new online tool that enable users to quickly assess on flood risks worldwide. Dutch institutes have been involved in the development of this tool.
● Sinking cities
Dutch research institute Deltares provided input to the new World Bank publication Evolving Risk that will be launched in Sendai. The publication is about future changes in risk, and Deltares contributed on the issue of subsidence and 'sinking cities'.
● UN DRR private sector partnership
Royal HaskoningDHV will be present as a member of the UN's Disaster Risk Reduction Private Sector Partnership.

Stay tuned
Stay tuned as news items on this website will keep you up to date on the Dutch contribution to the 3rd UN World Conference on disaster risk reduction (WCDRR).