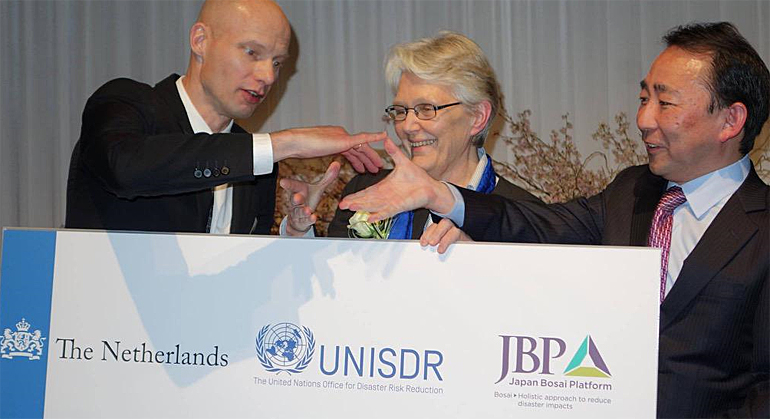 The Netherlands’ Ministry of Infrastructure and Environment and the Japan Bosai Platform (JBP), a business association representing 119 small to large corporations based in Japan, and UNISDR, agreed to develop a means to link suppliers of resilience building tools and services with the cities that need them.

At the WCDRR-conference in Sendai, Japan, the three partners presented the ‘Statement of Cooperation for Implementation of Resilient Cities Connect’, and announced to connect cities, development partners and businesses to exchange their knowledge, services and capacities to accelerate public and private actions to reduce risks in cities.

Better understanding between governments and businesses
The Special Envoy for international water affairs of the Netherlands, Mr. Henk Ovink said: "The Resilient Cities Connect aims to help public and private partners to substantially reduce risk and disaster losses, in lives and in the social, economic and environmental assets of communities and countries. It literally bridges the gaps between governments and businesses and builds trust through a better understanding."

The President of the Japan Bosai Platform (JBP), Mr Naohiro Nishiguchi said: "We are ready to design the infrastructure and process to connect potential local government needs to reduce risks with private sector solutions or innovate and generate new solutions, if necessary, to specific disaster risk reduction measures."

Ms. Margareta Wahlström, head of UNISDR, said: "It is clear that the risk in cities is growing faster than our ability to reduce them. We need to innovate and ensure that solutions, tools and methods for resilience building are not only available, but also accessible. We need to accelerate resilience building at the local level, and this partnership will contribute to do this."

The platform is part of the campaign Making Cities Resilient, the world’s largest association of local governments, with more than 2,500 cities and municipalities signed up to the partnership. The goals of the campaign are for cities to know more, to invest wisely and for these cities to build more safely.

This news item was originally published on the website of United Nations Office for Disaster Risk Reduction (UNISDR).

This video explains the aim of the Resilient Cities Connect platform and invites more partners to join.